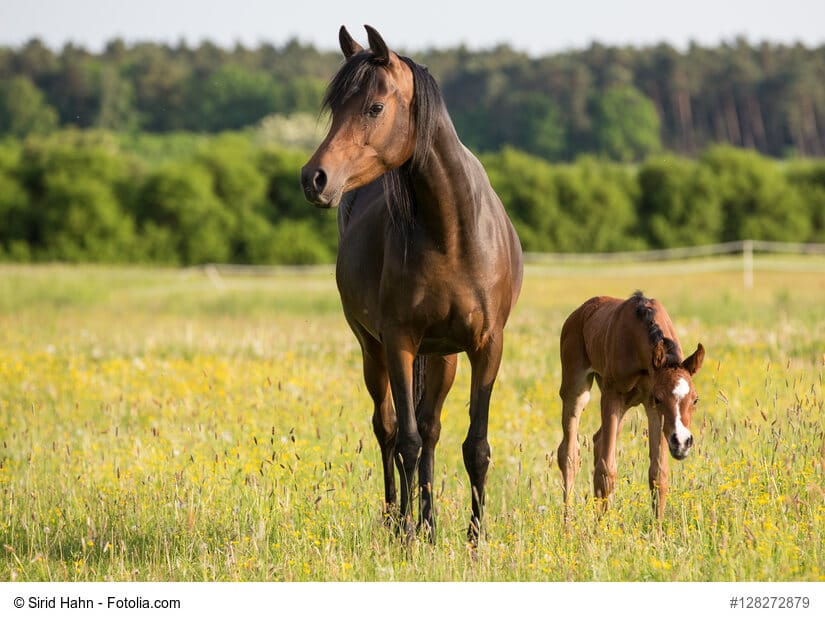 This article contains affiliate links and / or promotional content. You can read more about this here.

It is known as the most beautiful horse breed in the world: the Arabian thoroughbred. More elegant than almost any other horse, the oriental breed inspires young and old from all over the world. Whether in shows, films or as a leisure horse, the Arabian thoroughbred has become an indispensable part of the horse world. Here you can find out everything about the beautiful horses from the Orient. [Read article]

The Arab thoroughbreds are considered to be very good-natured and people-oriented animals that develop a close bond with their owner. Provided they are treated well. Because the intelligent horses are very sensitive and accordingly react sensitively to people who do not treat them well. But if you are good to your four-legged friend, the breed is particularly impressive because of its willingness to learn and the ambition it shows.

In addition to their philanthropic nature, the Arabian thoroughbreds have one spirited character, sometimes reaching into nervousness. you need a lot of exercise and have a immense endurance. At the same time, the desert horses are too pretty tough and can perform well in tough conditions.

Today the Arabian thoroughbreds are very popular mainly because of their human-related character Recreational horses. But also as Show horses the elegant animals are often used. On the other hand, they rarely appear in racing, as they have been replaced by the English thoroughbreds, which were bred for their speed.

For this they have taken another discipline for themselves: Endurance riding. Due to their impressive stamina and their pronounced urge to move, they are popular horses in this field. In addition, the Arabian thoroughbred is still considered a status symbol.

The Arabian thoroughbred was also crossed into many different horse breeds to improve other horses.

History of the Arabian thoroughbred

The Arabian thoroughbred is a very old horse breed that comes from the oriental area and there bred since the 7th century becomes.

Legend has it that the Prophet Mohammed released his horses after an exhausting fight so that they could quench their thirst at a nearby watering hole. Shortly after the horses were released, however, he called them back to test their loyalty. Only five of the horses came back before drinking from the spring. These five loyal mares were to become the five ancestral mothers of the Thoroughbred Arabians, from which each Thoroughbred Arabian descended.

For many centuries, the Arab thoroughbred was only bred in the Arab world. Only when Spain was ruled by Arabs in the Middle Ages did the reputation of the elegant and persevering horses penetrate Central Europe. The desire to own the noble horses increased until expensive expeditions to Syria were made in the 19th century to bring the horses to Europe. When they arrived in Europe, they began to cross domestic horse breeds with the Arabian thoroughbreds in order to improve the breed. Pure breeds were established with the few mares that were allowed to be imported from the Orient. One of the most famous pure breeds in Germany is the main and state stud Marbach.

Interesting and worth knowing

Because of his good-natured demeanor paired with perseverance and elegance, the Arab is featured in numerous films. You can find these, as well as reading tips and breeders, in this section.

The Arabian thoroughbred in film and television

In the classic movie The black stallion from 1979 everything revolves around the boy Alec and a black thoroughbred Arab "black". Together they survive a shipwreck and are stranded on a desert island. Brought together by fate, the struggle for survival begins, from which a close friendship develops. After the rescue, Alec takes the black man to his family in the United States. There the retired jockey Henry Daily discovers the talent of the two and trains the inseparable team. Together they achieve previously unthinkable.

Another story about the unusual friendship between a boy and his Arab thoroughbred is Lucky's great adventure. Richard finds a brown thoroughbred Arabian foal after it has lost its mother and takes care of "Lucky", as Richard baptizes the little stallion. A close friendship develops. But Richard has to flee. Lucky stays behind and lives the adventurous life of a wild horse. 14 years later, the now grown-up Richard returns and meets his old friend.

Also in The heart of an Amazon - wild and free it is about the friendship of an Arab thoroughbred and a child, the young Sonora. The girl learns that her aunt wants to sell her beloved horse Lightning and that Sonora should come to a home herself. The girl makes a decision and runs away with the horse. She meets a group of actors in which an actress with horses performs high diving in pools of water in front of an audience. An injury occurs and Sonora has to step in. Never done before, the girl manages the jump with her beloved horse and now performs the stunt more often. But there are complications: Lightning becomes ill and Sonora goes blind. Nevertheless, the two find their way.

In the film Hidalgo Frank Hopkins (played by Viggo Mortensen) competes with his Mustang Hidalgo against Bedouins and their thoroughbred Arabs in a 3,000-mile race through the Arabian desert to defend his title as the world's best endurance rider. An adventure that is as dangerous as it is exciting begins.

In the children's cartoon series Horseland the horse of the protagonist Sarah is a black thoroughbred Arab named Scarlet.

Every horse is unique, no matter what breed it belongs to. And no matter how long or short the pedigree is, every horse has similar needs. This has to be satisfied in order to enable a happy horse life.

Therefore, in the following section you will find a few general tips on keeping horses.

As mentioned at the beginning, every horse is one with similar needs as those for food, exercise and social contact. But depending on the task the horse breed was initially bred for, there are many different character traits: some are bred as sport horses and need more exercise than others and some are more leisurely workhorses. Just remember that the division into cold-blooded, warm-blooded and thoroughbred animals is mainly based on temperament.
So with our horses, too, it always depends on the individual living being. Because not all Shire Horses are giants with strong nerves and not every Arab is an enduring racer.

If you're just getting started, read this guide:

Once you have decided on a horse, these guides on horse keeping and equipment will certainly help you and answer your questions:

Regardless of whether you own a large cold-blooded horse or a small pony: every horse needs a certain amount of care to stay healthy. The hooves in particular require your special attention. You can read about what you should pay attention to in the tips on proper horse care here.

You can also strengthen your bond with your four-legged friend with regular grooming. After all, nibbling on each other's fur is an often seen social interaction between horses.

In addition to coat and hoof care, a balanced diet that is appropriate to the species is also important for a strong immune system and a long and happy horse life. You will find helpful tips in our nutrition guides:

In the case of dogs, cats, and mice, one or the other owner may still worry about the sense and nonsense of health insurance. After all, cats are said to have nine lives and always fall on their feet. And the cost of a vet visit with a guinea pig may remain affordable. But even with dog liability, things look different. And especially when it comes to a large animal like a horse.

So if you are thinking about health or surgery insurance for your four-legged friend or if you are wondering what types of insurance there are for your horse, you will find helpful information in this guide: