Visible light, shadows have a height

Select one of the seven light objects in this category to place a general light source. 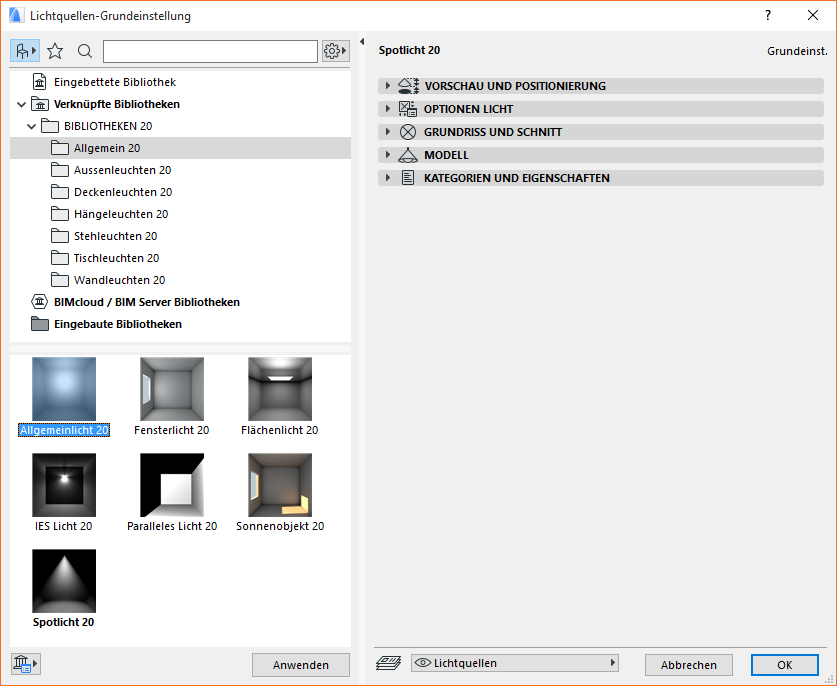 In contrast to indoor or outdoor lamps, general light sources contain special effects such as visible light or interference parameters. Click on the parameter popup to access these effect parameters.

The main effects page contains graphic links to the subpages:

There is a sample image or two on each page to better understand the effects of the parameters.

Note: Not all effects are equally available for each of the general light objects.

This effect controls the properties of the light beam in the scene.

Use the pop-up to select a Visible Light type: Visible, Volumetric, or Reverse Volumetric. The pictures in the popup will help you understand the options better. 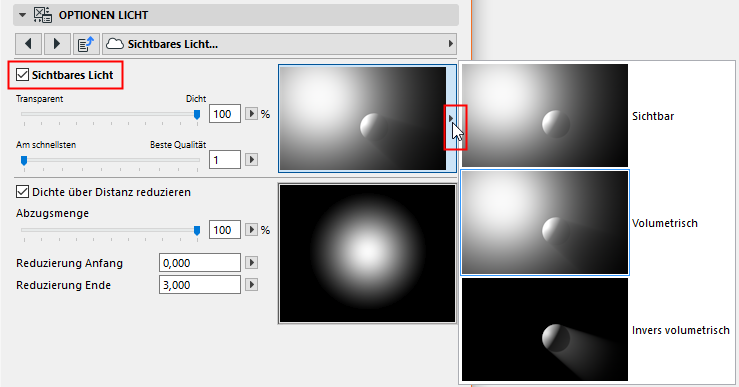 • Visible: This effect produces a visible light that penetrates all objects and is not influenced by them; the object does not cast a shadow in the light beam.

• Volumetric: Use the Volumetric setting if you want the visible light effect to cast a shadow.

• Reverse volumetric: This is the opposite effect of volumetric light: the light is visible where the shadow would normally lie in the light cone. This can be useful when you want to create the impression that an object is emitting light (e.g. a neon company logo on the facade of a building).

Density and Quality: Use the two sliders to adjust the density and quality of the light beam.

• Transparent / Dense controller: Defines how opaque this light cone is.

Reduce density over distance: Check this point to reduce the light density towards the edges.

• Extent of reduction: 100 percent means that the light fades completely.

• Use the Reduce Start / Reduce End fields to define where this reduction should start and where it should end.

Noise adds irregularities to the light source in two ways to make the effect more realistic.

The images in the control elements 'Light settings faults' make it clear what the parameters mean. 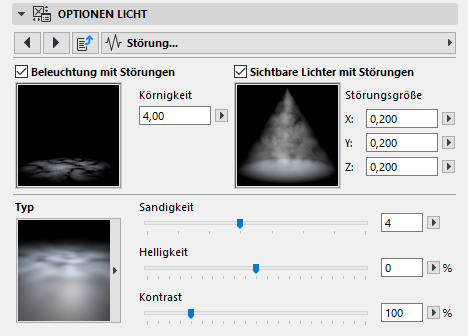 • Illuminated area with clutter: Check this box to add clutter to the illuminated surface.

Use the pop-up to select a disturbance type: Simple Disturbance or Soft / Hard / Wave Turbulence (creates a cloud-like effect). The pictures in the popup will help you understand the options better.

Use the controls to further adjust the selected disturbance effect:

• Grain: A higher value creates a large number of irregularities for a stronger grain effect.

• Brightness: Affects the general brightness of the white spots of the disturbance effect.

• Contrast: Affects the black and white contract of the disturbance effect.

Caustics are patterns of focused light that arise on surfaces and within visible light rays.

Check the box for the types of caustic you want to create (you can use both effects at once):

• Surface caustic: Achieves a caustic effect on the illuminated surface.

• Volume caustic: Achieves a caustic effect within the light beam. 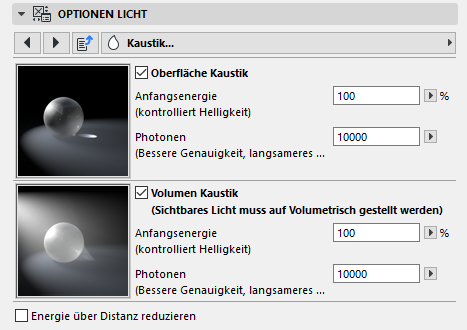 Important: The volume check box only has an effect if you have activated the Volumetric option for the Visible light parameter (Visible light page of the light settings): 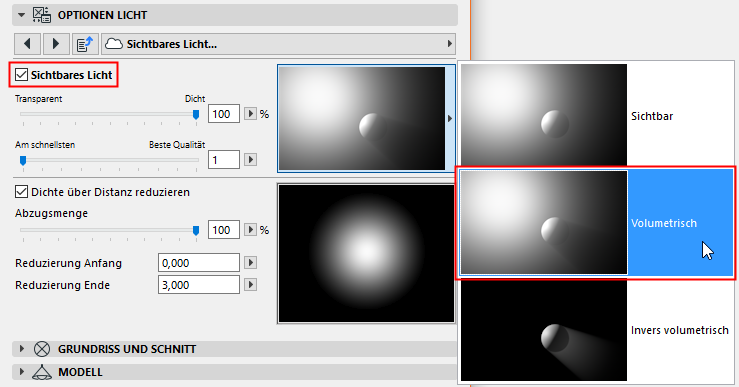 You can set the following parameters for both types of caustic:

• Photons: affects the accuracy and quality of the caustic effect; higher values ​​result in a longer rendering time.

Reduce Energy Over Distance: This option is not selected by default. If selected, you may not see the caustic effect if the light source is far enough from the surface.

Use of the caustic effect in photo realism

1. the corresponding caustic effects are also activated in the photorealistic settings (see caustic (CineRender effect)); and 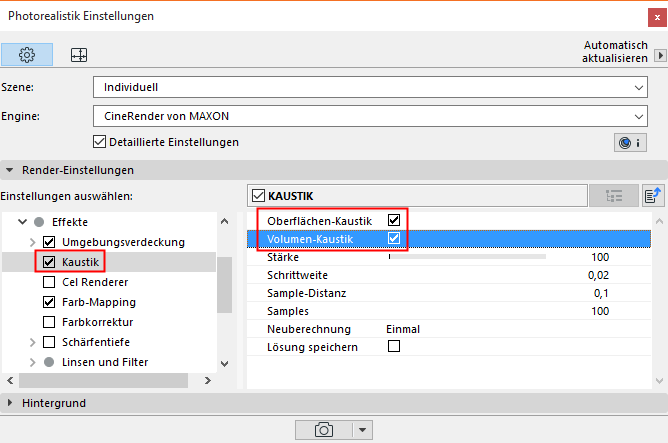 2. the caustic channel of the affected surface (s) is also switched on.

The lens effects simulate the optical aberrations of real camera lenses and film material. Its two main components are glow and reflexes.

• Glow is a type of overexposure

You can choose from a large number of predefined glow and reflex effects: Click on the popups to display the associated images.

Glow: Check this box and use the popup to choose a glow style for lens reflection. 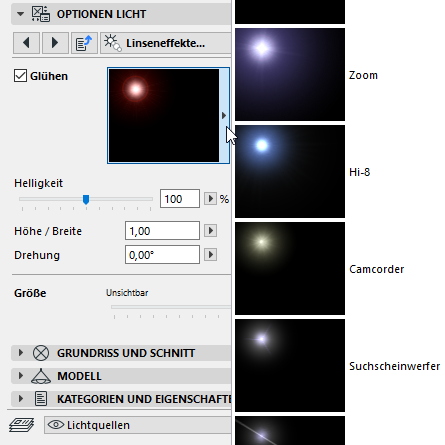 Reflexes: Check this box and use the popup to choose a reflex style for your lens effects. 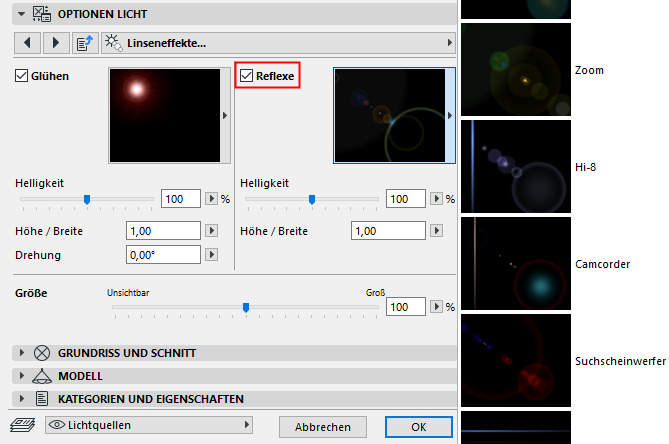 Use the Brightness slider to adjust the brightness of the glow and / or reflections in the lens flares.

The height / width value expresses a proportion; changing this value will distort the shape of the effect (glow or reflex).

Use the rotation parameter (enter an angle) to rotate the glow element.

The lens flare is a so-called “post effect” that is applied after the rendering calculation is complete. 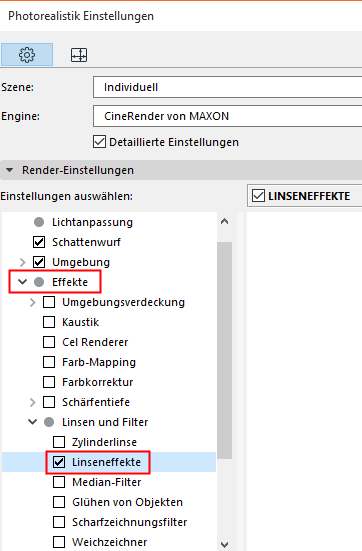 This effect cuts off the lighting effect between two points.

Check the boxes to define near clipping and / or far clipping.

For each cut, define where the effect should start and end. 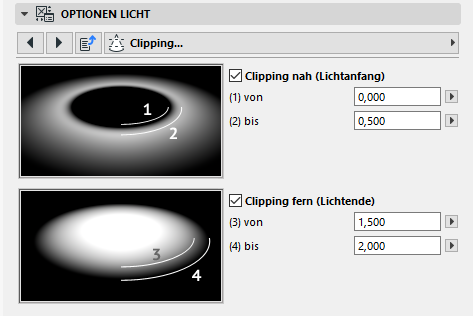 These effects are important general parameters for your lighting effects. Click the check boxes on and off to see how the sample image changes to understand the effect.

Use of global lighting: This is switched on by default. Global Illumination (GI for short) is a sophisticated method of creating realistic lighting effects in your model. This algorithm simulates not only the effects of direct light sources but also indirect light effects, i.e. H. Intermediate reflections caused by light rays that are reflected from surfaces.

Ambient lighting: Usually the brightness of a surface is determined by the angle at which the light hits the surface. However, when the ambient lighting is on, the angle does not matter. All surfaces are illuminated with the same intensity; this results in a significantly flatter appearance. When calculating the lighting, only the color of the material is taken into account.

Effects only, no lighting: With this option, only the visible light (light cone) plus the lens effects are displayed. No objects are illuminated by the light source.

Illuminate in one direction only: Check this option if your rendering does not need the light to illuminate the area in all directions. (Use the purple hostpots in the lines of Lighting Show in 2D and 3D to graphically adjust the direction.) 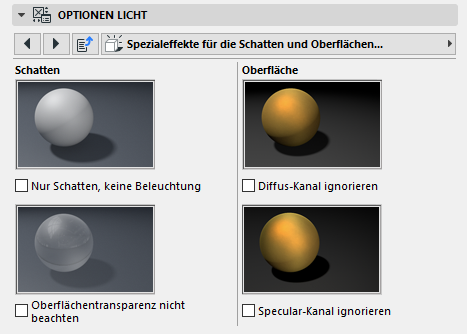 • Shadows only, no lighting: Use this option if you want the light object to create only a shadow without creating any light. This can be useful if your scene contains multiple lights and you don't need all of the lighting for the scene.

• Ignore surface transparency: Select this option to keep the rendering times as short as possible (e.g. for a test rendering).

• Ignore diffuse channel: With this option the color properties of an object are ignored by the light source; only reflective surfaces are produced by the light. This can be useful for objects such as a gold signature that you want to achieve a reflective sheen but without illuminating the color properties. This also creates a stronger metallic effect.

• Ignore reflective channel: With this option, the light source does not create reflective highlights on the objects in the scene. This can be useful, for example, when an object is illuminated from both sides by two light sources and too many highlights are created in the process. You can keep the lighting but reduce the highlights by using Ignore Specular Channel for one of the lights.

One of the common sources of light is the solar object. A simpler alternative to the sun defined in CineRender's physical sky settings; and it uses the CineRender possibilities better than the ARCHICAD sun.

The sun object provides lighting based on the time and place settings of the ARCHICAD sun (see Sunlight settings :.)

Alternatively, the sun object can be positioned manually: In the settings for the sun object, select the Set sun position manually check box. The azimuth / elevation values ​​are now editable, and they are automatically adjusted as you move the object in the model. 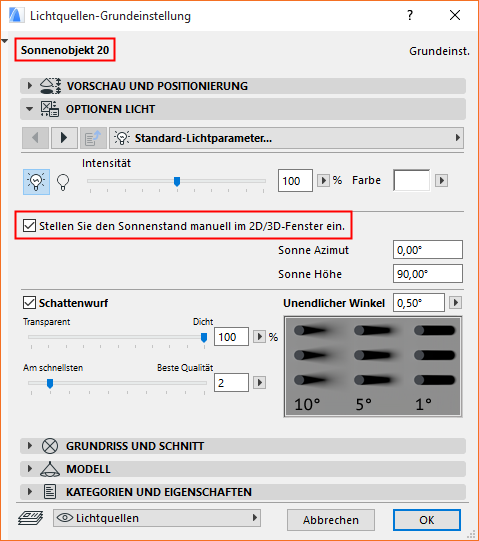