When do people retire

This is how retirement works in the world

In a comparison of all OECD countries, the French enjoy the longest time in retirement: for women it is 27.6 years, for men it was almost 24 years in 2016. In Germany, the statutory retirement age is currently increasing from 65 to 67 years; the process will be completed in 2029. In 2016, German women spent an average of 22.6 years in retirement, compared to 19.5 years for men.

The number of people over 100 is increasing

It is not just the retirement age that determines the time in retirement. Life expectancy is also increasing and people around the world are getting older. The number of people who live to be 100 years or older is growing accordingly. The number of people over 100 grew to a new high of around 533,000 worldwide in 2019, and the United Nations is expecting another 50,000 more for 2020. This means that their number has almost quadrupled since the turn of the millennium, as the Federal Statistical Office announced. The global average in 2000 was 25 people over 100 years for every million inhabitants. In 2019 there are already 69. Almost 80 percent of them are women. 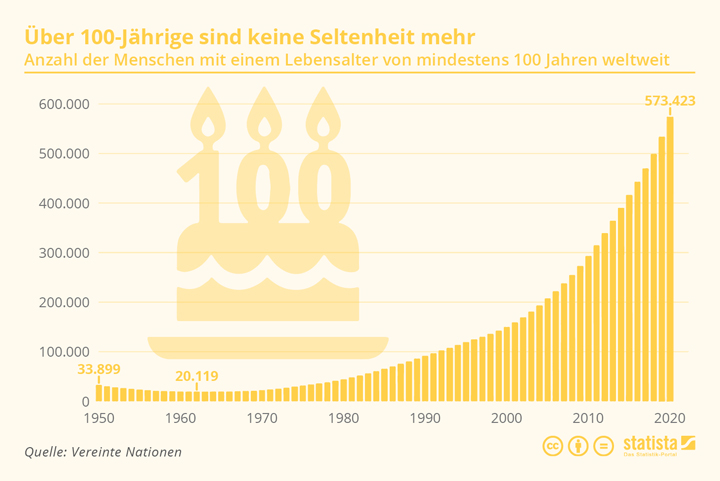 Spaniards, French and Italians have the highest life expectancy in the EU. This is shown by data from Eurostat, which indicate the average life expectancy at birth as of 2017. At 81.1 years, Germany is in the middle of the field. If you only look at Western Europe, Germany and Denmark are at the bottom of the ranking. Life expectancy is only lower in Eastern European countries, where it is consistently below 80 years. Bulgaria has the lowest life expectancy of all EU countries at 74.8 years.

According to science, life expectancy depends, among other things, on diet - and this is on average better in many Mediterranean countries than in the rest of the EU. Mediterranean cuisine is based on many fish dishes and also contains significantly more vegetables, salads, pulses and fruit. Scientists attest the Germans a comparatively unhealthy diet, which leads to obesity and cardiovascular diseases. According to experts, the following factors also have a negative effect on life expectancy: Poverty, low life satisfaction, stressful environmental influences, little physical activity and everyday stress.

Carefree retirement in Iceland and Switzerland

In Iceland and Switzerland, pensioners have a particularly good chance of a carefree retirement. This has been determined by the current Global Retirement Index. This evaluates the living situation of retirees on the basis of factors such as health, finances and quality of life. Germany ranks 13th out of 44th. In one area, the Federal Republic comes off below average: finances. Among other things, the tax burden and so-called age dependency are assessed here. The latter indicator provides information about whether a society is in a position to shoulder the increasing pension burden financially. The situation in Germany is tense because, on the one hand, the number of births is falling and, on the other hand, life expectancy is increasing. The so-called baby boom generation will soon be retiring. Baby boombers are the baby boom cohorts from 1955 to 1965. The economic miracle caused rising birth rates at that time.

The situation of retirees in Iceland and Switzerland is particularly positive. In Iceland, the index rates material well-being in particular as very good. Factors such as income equality, income per capita and the unemployment rate are included. Switzerland, on the other hand, is particularly strong in the area of ​​quality of life. This assesses the state of the environment, the degree of air pollution and the life satisfaction of the residents. In contrast, India brings up the rear when it comes to quality of life. The country also has severe health deficits, where life expectancy and health expenditure per capita are assessed.