What is a singularity made of

Singularities are sporadic appearances in common parlance (singular events). The root of the word singulus comes from Latin and means 'individually'. In mathematics, physics and astrophysics there are also singularities that can be characterized as 'infinities'.

Singularities in math and science

The singular points in mathematics are distinguished by the fact that they are not mathematically defined. An example here is dividing by zero. This value tends towards infinity in the limit value, because something finite (or constant) is divided by something arbitrarily small.
There are even singularities in meteorology. Here, however, special weather phenomena are meant that occur again and again in a characteristic way, but seen sporadically over the course of the year; e.g. the Ice Saints or the Indian summer.
Singularities in physics are related to those in mathematics: a physical quantity such as pressure, temperature or mass density becomes infinite. This strange behavior only occurs in the context of theoretical physics in a calculation - but it has so far not observed in nature been.

Two forms of singularities in astrophysics 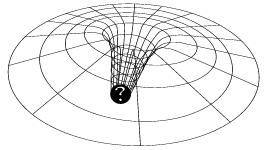 It is serious when the singularity exists in all coordinate systems. Then it is a curvature singularity that too real or intrinsic singularity, sometimes tooSpacetime, physical or essential Called singularity. This is Not to fix! It seems plausible to assume that space-time here is a infinite curvature learns. For this reason, tidal force and matter density also diverge here.

Earlier (before 1967) the term singularity in astronomy only meant black holes. The curvature singularity of the black holes is hidden by an event horizon. At this point of infinite curvature lies the entire mass of a black hole! In other words, the source of the gravity of a black hole is the curvature singularity.
In cosmology, the theorists of relativity found the second important singularity of astronomy: the Big Bang Singularity. When the pioneers of cosmology used general relativity to describe the cosmos as a whole in the early 20th century, they found dynamic universes. The expanding cosmos could very well clarify the astronomical observation data, because the American astronomers V. Slipher and E. Hubble were able to measure that the galaxies move away from each other on very large, cosmological space scales: They follow the expanding space-time of the universe! If one extrapolates this expansion into the past, then there must have been a very small universe. Found in 1931 G.A. Lemaîtrethat the cosmos must have been united in any small point. This was the discovery of the Big Bang singularity. Lemaître spoke of the 'birth of space'.

A good way to find the real singularities is to useCurvature invariants (engl. curvature invariants). These (scalar) quantities depend on the Riemann curvature tensor (Riemann invariants), the Ricci tensor (Ricci invariants) and the Weyl tensor (Weyl invariants) together and are the same in every coordinate system! A discussion of these quantities reveals a lot about the curvature properties of spacetime. A good criterion for finding intrinsic singularities is to look for the places (coordinate points, better: world points) where the curvature invariantsdiverge, so increase immeasurably. This happens, for example, when dividing by zero. In contrast to the coordinate singularities, the divergence cannot be remedied with other coordinate systems.
The Riemann invariant is obtained by multiplying the contravariant Riemann tensor (all four indices above) by the covariant Riemann tensor (all four indices below), as is exemplarily shown in the lexicon entry Kretschmann scalar. The quantity obtained in this way is invariant, i.e. the same in all coordinate systems. Those places where the Riemann invariant diverges (denominator zeros, poles) characterize the intrinsic singularity.

As already described, intrinsic singularities occur with the classical black holes of the ART. The original singularity of the Schwarzschild metric is r = 0 because the Riemann invariant has the value 48 M.2/ r6 Has. In this case, the term 'hole' can also be interpreted in such a way that the Schwarzschild geometry has this singular point, which has a special role in the entire space-time.
Instead of the central point singularity, the Kerr geometry shows an intrinsic ring singularity, which, however, is also at r = 0 - this is confirmed by the curvature invariants. [For experts: the ring shape can be discovered if one transforms the function ρ of the pseudo-spherical Boyer-Lindquist coordinates back to Kerr's original pseudo-Cartesian coordinate system. This is somewhat surprising, since the Riemann invariants are independent of the coordinate system used; but there are coordinates that allow a simple interpretation of the singularity structure and those that tend to obscure or even prevent it.]
Ultimately, the mass of the black holes resides in these essential singularities. Because otherwise space-time is 'empty', there are no further sources in Schwarzschild or Kerr geometry. In the Schwarzschild solution, the spacetime singularity is a static point; in the Kerr solution it is a stationary, rotating mass flow in the form of an infinitely thin ring.