Are the Silversun pickups still together?

Learning by doing. Trial & Error. Just ask in the pub around the corner whether you might not even perform with a few of your guitar friends between the counter and the slot machine. Stage? There are still a few square meters free up there. Pay? Well, a couple of beers would be fine. Sometimes L.A. is no more glamorous than Gelsenkirchen.

As recently as 2005, Silversun pickups were primarily a spontaneous creation. Brian Aubert (vocals, guitar), Nikki Monninger (bass, vocals), Christopher Guanlao (drums) and Joe Lester (keyboard) spontaneously come together and spontaneously decide to give it a try on a stage. But only gradually does a band with a vision grow out of the semi-improvised project.

"To be honest, in the beginning we were on stage trying to figure out what we wanted to do. But we learned while we played - and I learned to be a front man", recalls Aubert. Thanks to the enthusiasm of the audience, he quickly managed to overcome his initial shyness. Silversun Pickups became a band whose second home was the stage.

This was followed by an impressive walk through the indie and rock establishments of California and finally all of North America. With compact songwriting, smashing pumpkins roughness and stormy shoegazing, as My Bloody Valentine could not put it better, they go on a campaign of conquest. Her weapon are sweeping melodies that hold the gigantic guitar walls together at all times. 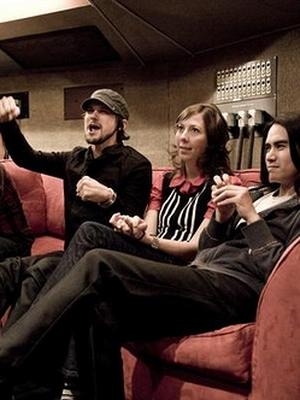 The indie Dangerbird Records signs the quartet and releases the EP "Pikul". Result: gigs with Brendan Benson, Black Rebel Motorcycle Club, Dead Meadow and Two Gallants. And Tada: The debut album "Carnavas" is now one of the best-selling indie records of all time.

With "Swoon" the quartet can consolidate its status. Already on the next album "Neck Of the Woods" the first signs of electronic gimmicks creep in, which lead to a readjustment of the sound image on the 2015 released "Better Nature".