How can hirsutism be cured

Hirsutism is defined as hairiness in women that is similar to the male distribution pattern (chin, upper lip, neck, back, chest, etc.). The expression can range from very mild to very pronounced.

As with many medical problems, there is a smooth transition between what is still considered "normal" and a hair pattern that may require more detailed clarification and perhaps treatment. Whether a woman has normal, increased or abnormally pronounced body hair also depends on the person's own assessment. It can happen that pathologically increased body hair from the male distribution pattern is not perceived as disturbing by some women, while others feel markedly impaired by only a small amount of excess hair. Increased body hair can occur together with other disorders, e.g. in combination with menstrual cycle disorders, oily skin, reduction in head hair. Several tables and schemes are available to the clinician to determine the severity of the disorder.

There are many factors that hair growth depends on. In the case of the problems mentioned, it should be discussed with the doctor to what extent the symptoms actually occur, e.g. due to expected and tolerable side effects of medication or whether, for example, hormonal disorders may be responsible.

Too Much Male Hormones?

In the following, reasons for increased hair growth on the body, which are based on a change in hormone metabolism, will be discussed. An excess of so-called male hormones (androgens with testosterone as the main representative) often leads not only to increased hair growth or a "lady's beard", but can also cause hair loss on the head, menstrual disorders or so-called "blemished skin" with acne. The term "male hormones" is misleading insofar as women also produce testosterone, but usually in significantly lower amounts than is the case with men.

Figure 1: The main production sites for androgens in women are mainly the adrenal glands and sometimes also the ovaries. They reach the respective cells of the body (e.g. the skin or hair root cells) via the bloodstream and can convey their effect there. 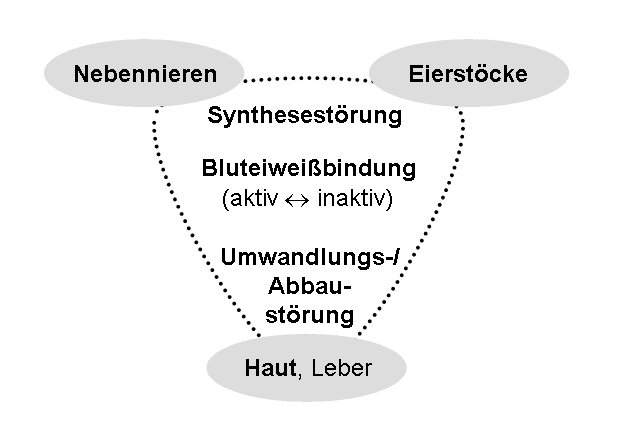 The most important androgen-producing organs in women are the adrenal glands and, to a lesser extent, the ovaries, but also the fatty tissue. During pregnancy, the placenta ("placenta") and the developing child are also possible sources of hormones. A further complication is that male hormones (androgens) are converted into female hormones (estrogens) and that the male hormones develop their effect via a receptor (docking point on the cells) (Figures 1 and 2). Both functions can also be disturbed: a reduced conversion and / or the breakdown of male hormones or an increased activity of the receptor for the male hormones can contribute to hirsutism. The male hormones are bound to a high proportion of protein molecules, which facilitates their transport. If this bond is changed, the balance of free active and bound inactive hormones is affected. This can lead to different activities being found for the same total amount of male sex hormones. This complicated system can make it very difficult to find out exactly where the problem is. For an effective therapy, however, the elucidation of the cause of the hirsutism is of decisive importance. Detailed discussions and patient examinations, blood tests, ultrasound examinations of the ovaries, hormonal function tests and, if necessary, additional genetic examinations help.

It is important for the blood analysis that the blood is taken in the morning and in a certain phase of the cycle (shortly after the start of the menstrual period) and that those affected do not take any medication that can mask the disease or "falsify" the blood values. These include glucocorticoids ("cortisone preparations", including ointments and certain sprays for inhalation), the "pill", but also anti-hormonal therapies, substances for muscle building or certain agents against fungal diseases or for HIV therapy.

The term adrenogenital syndrome (AGS) summarizes a group of cortisol formation disorders of the adrenal glands, which are associated with changes in the formation of male or female sex hormones. Figure 2 outlines the cortisol formation without (A) and with disturbance (B). The AGS is passed on to the affected child by both parents at once and can occur in different forms, a severe form or a mild form, the non-classic AGS (late-onset AGS). If the expression is very strong, it can also lead to masculinization in female children - hence the name. The severe form is usually diagnosed in early childhood, the mild variant often only causes symptoms from puberty or in young adulthood.

But this situation can also typically be proven by hormonal stimulation tests and laboratory analyzes and by genetic examinations.

The so-called "21-hydroxylase defect" is the most common. Depending on the extent of the disorder, in addition to hirsutism, hair loss, acne or cycle irregularities can result, or even an unfulfilled desire to have children. Occasionally the blood pressure is a little lower than in other people, with dizziness or even turning black in front of the eyes. If the disorder goes beyond that, breast growth may also be affected.

Figure 2A: The production of cortisol is normal. 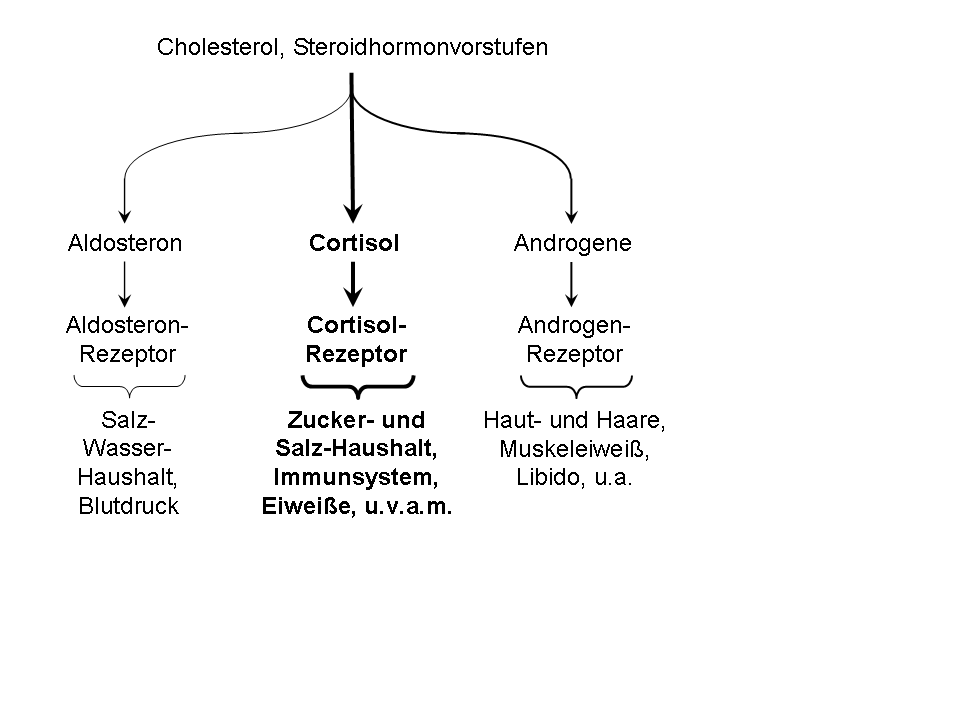 Figure 2B: The formation of cortisol is hindered by a sluggish enzyme. The precursors therefore take a different synthetic path: androgens. 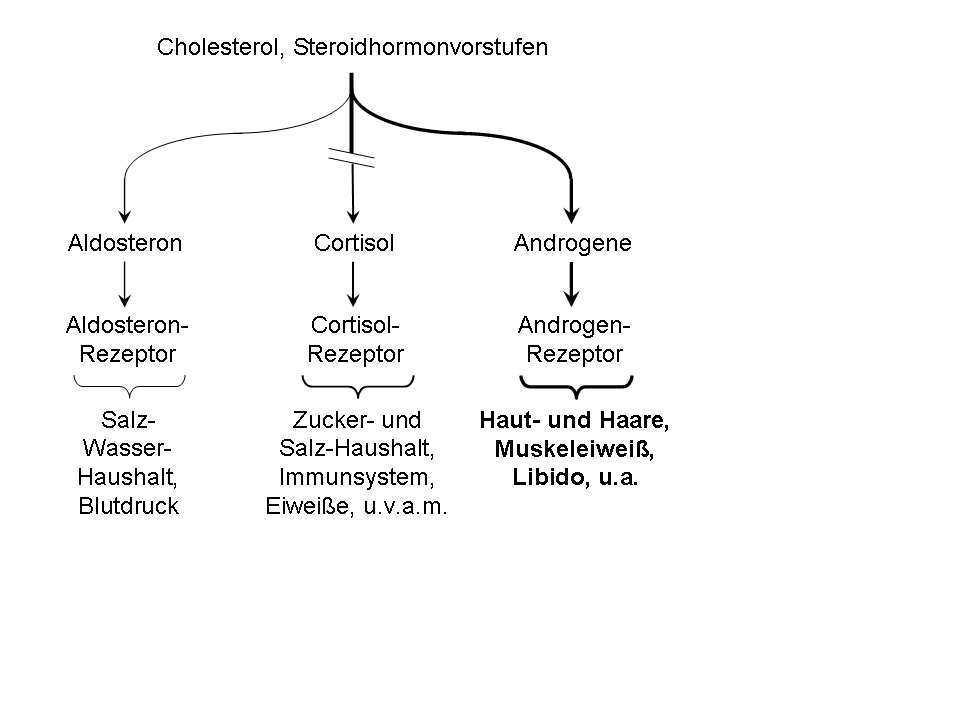 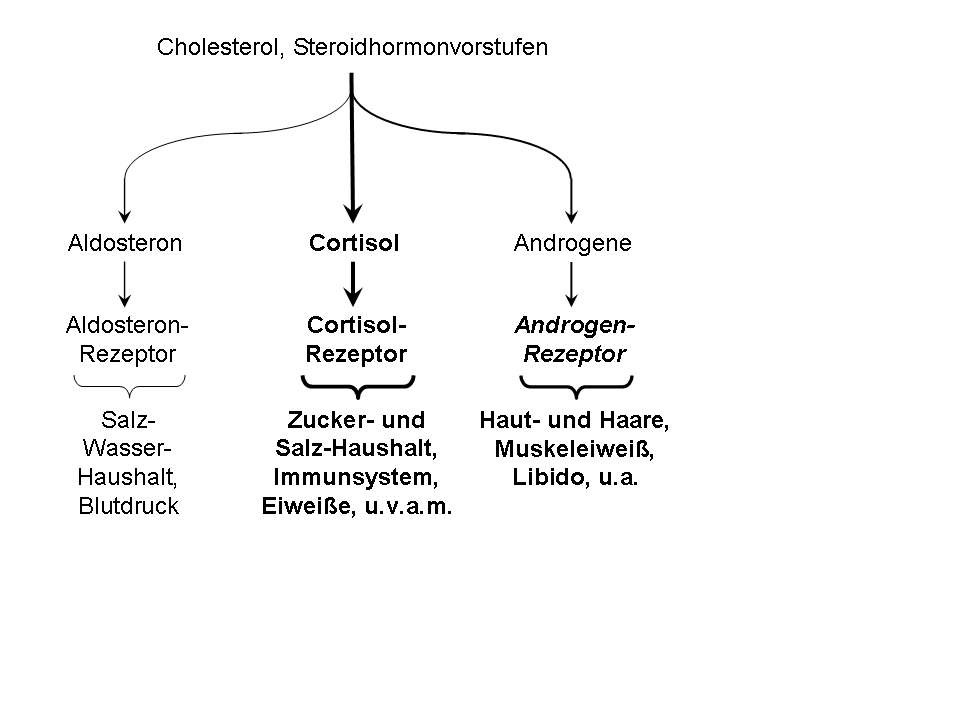 Since genetic defects can be passed on to one's own children, genetic counseling is sometimes necessary in order to successfully implement family and therapy planning.

In polycystic ovary syndrome, the male hormones are produced in the ovaries. How the synthesis disturbance comes about is not yet fully understood. One hypothesis assumes that problems with the normal cycle lead to a sustained stimulation of hormone synthesis in the ovaries and thus to the increased formation of male sex hormones. Cycle disorders and remodeling processes in the ovaries with cyst formation are therefore in the foreground and suggest this disease. However, there are different variants of polycystic ovary syndrome. One of the variants is associated with a tendency to sugar metabolism disorders. In many cases, tests are therefore carried out to determine whether the blood sugar level is increased or whether diabetes mellitus is present. In such metabolic diseases, the binding behavior of the hormones can be changed.

There is a rare possibility that tumors of the adrenal gland or ovaries lead to increased production of male hormones.

Therapy depends on the cause of the disorder. With non-classical AGS (late-onset), the production of androgens in the adrenal gland can be slowed down by replacing the missing hormone cortisol. Alternatively, drugs can be used that affect the action or transport of male hormones. In the case of rare adrenal tumors or tumors on the ovaries, the source of the androgens is removed by surgical therapy. If the ovaries are the source of the androgens, in the presence of a polycystic ovarian syndrome (PCOS) the hormone production in the ovaries can be slowed down by the supply of estrogens (eg in the form of a "pill"), in combination with a progestin, which has the effect of testosterone blocked at the receptor. In postmenopausal women, ovarian overactivity can also be slowed down by other hormones. Depending on the life situation, the symptoms or the presence of accompanying diseases, individual therapies are often sought. Because of possible side effects, low-dose therapy is often carried out with the glucocorticoids ("cortisone preparations") and sometimes only for a temporary period, e.g. to fulfill a desire to have children. Often, however, you can also - in the case of mild adrenal disorders - carry out hormone therapy with the pill, because the pill binds the male hormones more strongly and their effect is weakened. If there is a problem with the sugar metabolism, diabetes therapy is often used (e.g. with metformin). In addition, these therapies are also often combined, and there is also the option of blocking the androgen receptor. Overall, the therapeutic options are very diverse, especially if the desire to have children is not yet being pursued. Unfortunately, due to the complexity of the metabolism of androgens, not every case can be resolved, and the patient's wishes cannot always be met. It is also the case that various forms of therapy have only been tested to a small extent for some disorders, which means that the permitted use of the medication is often limited and must be discussed with the patient as an exception. The treatment therefore belongs in the hands of a competent doctor who will plan an individual examination and therapy.