What is chemical pollution

The Impact of Hazardous Chemicals on Population Health: What Is Known and What Can Be Done to Reduce Risk?

1. How are we burdened by harmful chemicals and how can their effects be prevented?

Chemical substances, whether of natural origin or manufactured, are part of our environment.

People can be exposed to these harmful chemicals in a number of ways: through the food we eat, the water we drink, the air we breathe, and our work environment. Monitoring tools are in place for each path to alleviate this burden, and workers can be protected by applying proper safety rules. In many developing countries, however, there is a lack of these regulations and the means to enforce them. For this reason, reducing exposure to harmful chemicals is one of the components of the three sustainable development goals1: SDG 3 "Healthy life for everyone", SDG 12 ("Sustainable Consumption and Production") and SDG 6 "Water and sanitation for everyone".

The chemical, physical and toxicological properties of chemicals vary widely. While many of these substances are neither dangerous nor persistent, others can be life-threatening on contact or persist in the environment, accumulate in the food chain, travel long distances from where they are released and be harmful to human health at low concentrations.

Harmful chemicals can thus have a major impact on the health of the population2 to have. Global exposure to disease from environmental pollution and improper handling of harmful chemicals results in at least 4.9 million deaths / year, including at least 1.2 million deaths from industrial and agricultural chemicals; Acute poisoning accounts for 2% of all deaths and 1.7% of the total disease burden worldwide. Heavy metals, pesticides, solvents, paints, cleaning agents, kerosene, carbon monoxide and pharmaceuticals, for example, lead to accidental poisoning, which leads to death in an estimated 193,000 cases each year, the majority of which is due to avoidable pollution.

Exposure to certain toxic chemicals can cause cancer, decreased nervous system development in children, Parkinson's disease, side effects during pregnancy, cataracts, chronic lung disease, and even suicide. Over a third of ischemic heart disease, the leading cause of death and disability worldwide, and over 42% of strokes, the second largest cause of the world's death rate, could be prevented if exposure to harmful chemicals could be reduced or eliminated. For example, secondhand smoke and air pollution contribute to 35% of acute lower and upper respiratory infections, including pneumonia, bronchitis, otitis and bronchiolitis, the leading cause of death in children. These harmful stresses are also associated with low birth weights and miscarriages or stillbirths. The figure below shows the number of deaths and the disability-adjusted years of life (DALY)3which may be due to environmental factors. 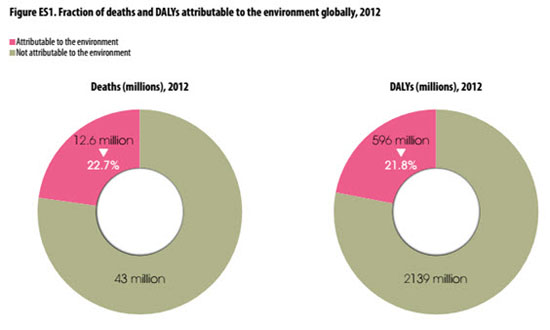 Fraction of deaths and DALYs attributable to the environment globally, 2012

2 To better understand the difference between the terms hazard and risk in assessing the properties of a chemical, watch the short animation video: www.youtube.com/watch?v=PZmNZi8bon8

3 That calculated for a disease or a state of health Disability-adjusted year of life (DALY) is the sum of the years of life lost (YLL) due to premature mortality in the population and the years of life lived with illness / disability (YLD) in people living with the state of health or its consequences. A DALY can be thought of as a lost year of a “healthy” life. (WHO)

3. What can be done in practice to reduce the burden?

The World Health Organization (WHO) estimates that 71% of accidental poisoning could be avoided by increasing chemical safety. Measures to be taken may vary across sectors, but all focus on better regulation of chemicals and contaminants where appropriate. This includes:

Social factors also influence the burden and impact of environmental risks and must be systematically included in risk monitoring and strategic planning.

4. What is the financial impact of exposure to harmful chemicals on society?

It is difficult to make a global estimate, but for each sector specific examples can be helpful in understanding the scope of the problem:

Overall, avoiding exposure is essentially more cost-effective than treating the diseases that result from it.