How is this PCB factory

Electrical production in Shenzhen: from the life of a printed circuit board

"Made in China" is written on most electronic items. This often refers to the area around the city of Shenzhen, a 15 million-inhabitant metropolis in southern China, right on the border with Hong Kong. This is where 90 percent of the electronics produced in China come from. Help.ORF.at visited a circuit board factory in Shenzhen.

We are in one of the suburbs of Shenzhen, in an inconspicuous building with beige tiled outer walls. Everything here is getting a little old, but functional. Together with 30 technicians, hobbyists and students from Europe, Asia and Australia we visit a circuit board factory. Most of our group are considering having one of their inventions made in Shenzhen at some point. Lily Li organized a tour of the production facilities in Shenzhen for them. Li is Community Manager at xfactory, a hip company that helps startups develop and manufacture new products in Shenzhen. 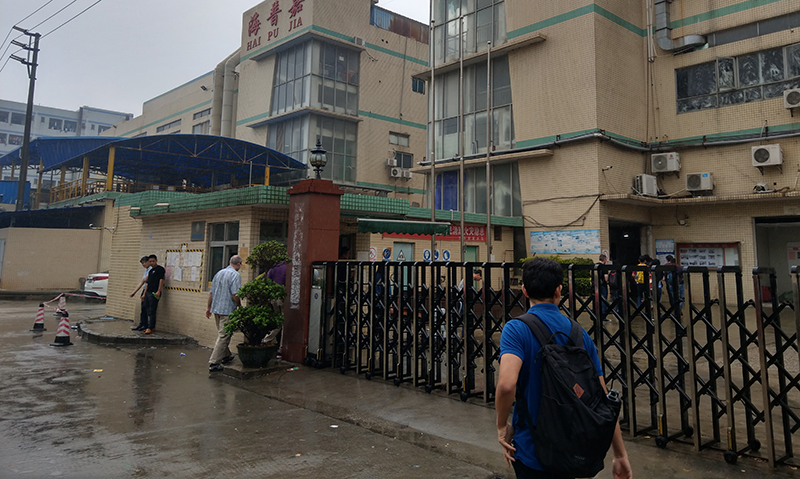 The building in which the printed circuit board factory is rented

Our first stop is the "Shenzhen Tianju Shiye GmbH", a printed circuit board factory in the northwest of the city. Anyone who has ever taken an electronic device apart is familiar with printed circuit boards. These are mostly green plates with complicated-looking tracks and copper-colored squares and circles. They are like the basic structure of every electronic device. Because the tracks made of copper conduct the current between the components, which are later soldered onto the circuit board. 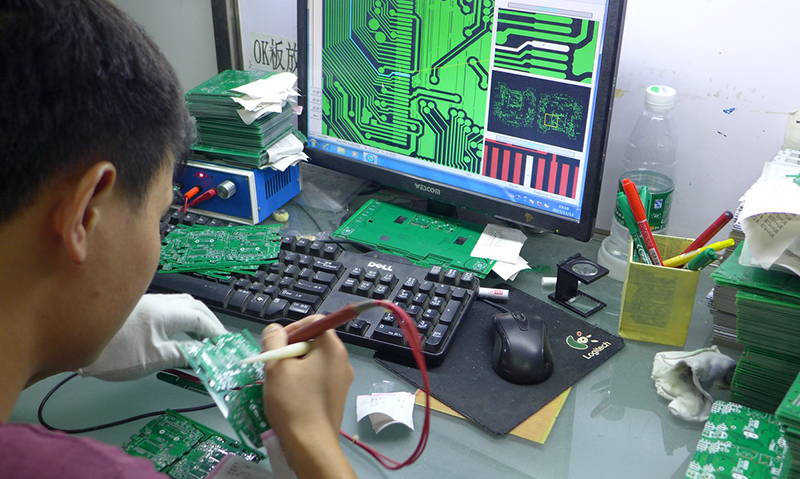 In the beginning, however, the plates are not green, but orange-reddish. They are delivered as blanks made of fiberglass with a layer of copper on top. In a first step, holes are punched into the blanks according to detailed plans. The components, such as LED lamps or resistors, are then to be soldered into these holes on the finished circuit boards. After the punching, it goes on to the second floor, for etching. There are several rows of angular plastic tubs with liquids in different shades of blue, green and white. Workers in rubber boots and yellow rubber gloves heave the plates out of the liquids and screw them onto racks to dry. There is also a machine that dips the copper plates into the liquids in a precisely programmed sequence. 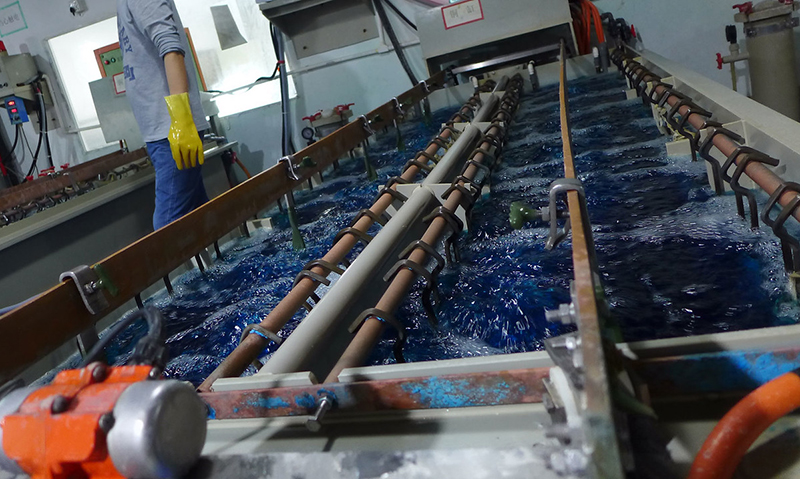 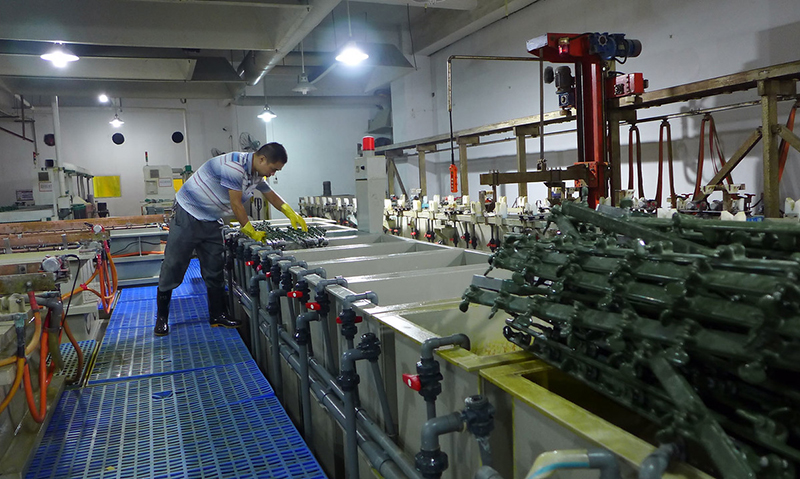 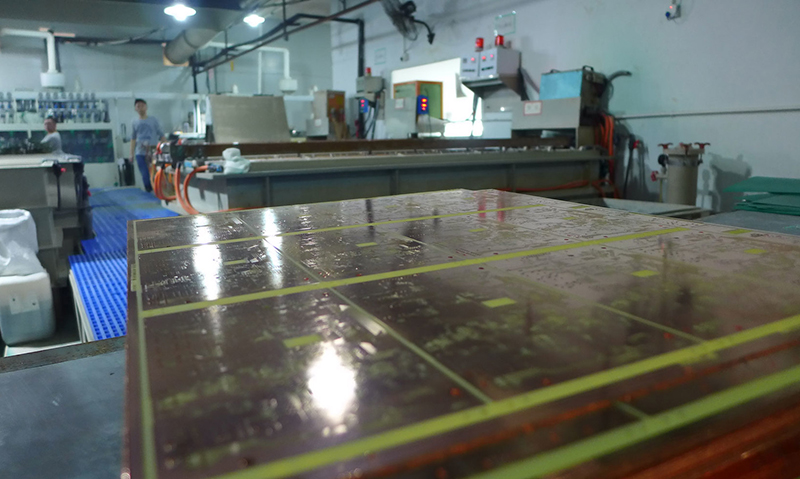 Boards during the manufacturing process. The copper tracks of the printed circuit board will later be created in the yellow masked areas.

The green color is finally given to the circuit boards by a protective coating. A quality check completes the production. However, when the copper is etched away, toxic wastewater is created because it contains copper and has to be disposed of as hazardous waste. One of the managers, Mr. Jun Li, explains to us that the environmental regulations in Shenzhen are very strict. The factory has its own facilities for cleaning the wastewater, and you can even drink it afterwards. “Nevertheless, we no longer get a license in Shenzhen,” complains the manager. “The city no longer wants factories, just offices.” In about a year the factory will therefore be relocated inland: “The local authorities are promoting the establishment of factories there. And the salaries are also lower. "

In Shenzhen, a simple worker earns 5,000 renminbi per month, which is around 640 euros. Skilled workers or managers get twice as much. That is a relatively large amount for China. However, rents are very high in Shenzhen: In a dilapidated house, a 15 square meter room with toilet costs the equivalent of around 150 euros a month. We work 10 hours a day, six to seven days a week, Mr. Li tells us. Even 12-hour shifts are currently still normal, confirms the boss of “Shenzhen Miangjian Mojie GmbH”, another factory that we visit. 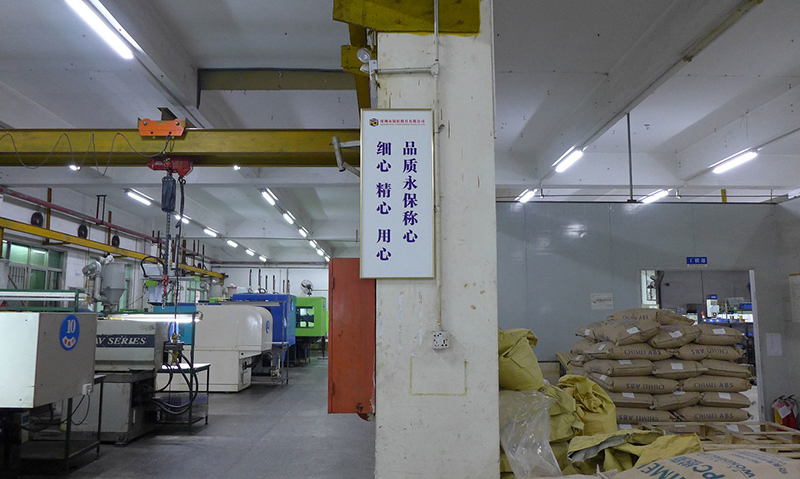 "With care, meticulousness and hard work for the quality and durability of our products" is written on the sign.

This is where the plastic housings are made, in which the electronic parts will later be built. The company manufactures, for example, the housings for pocket calculators, alarm clocks and printers. To do this, very precise iron shapes are created first. In the so-called injection molding process, they are filled with liquid plastic. After curing, workers remove the finished shapes, process them further as required and pack them. Here people work in 12-hour shifts, but at the end of the year there should be 8-hour shifts. A new law prescribes that, the boss tells us. 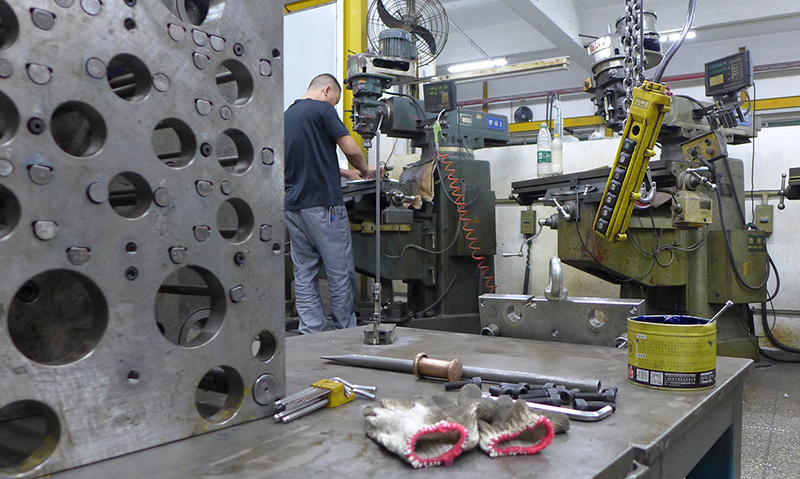 The production of iron molds

Talking to workers about their working conditions is hardly possible because of the noise. We also fear that we could put them in a difficult position if we just ask them about their working hours and their wages in front of their boss. To do this, you would have to speak to independent trade unions, which are not so easy to find in China. In any case, working conditions are not an issue in the group with which we are traveling, after all possible future clients.

The trip to China took place as part of a research grant from the Robert Bosch Foundation.