What are the transposing instruments

Transposing means shifting all notes of a piece of music by the same interval.
This is how these notes become

transposed these down by one note:

Octavings are not taken into account, i.e. the information in A can mean a sixth higher for one instrument and a third lower for the other. Instruments that only play octaves, e.g. guitar (sounds an octave lower than notated) or piccolo (sounds an octave higher than notated) do not count as transposing instruments. The reason for these octavings is solely the better legibility of the notes.

Transposing instruments are found (with very few exceptions) only among wind instruments. Typical representatives are clarinet (in A, Bb, Es, D, etc.), saxophone (in B. and It) and horn (in F. or B.).

Important: The transposition has nothing to do with the instrument itself, but is a general definition! Would you decide to transpose the treble recorder to the flute? "in F" to explain, nobody would have to buy a new recorder. Instead, all existing grades would have to be rewritten!

The transposing instruments have evolved with the spread of tempered tuning. This made it possible to play cleanly in keys with many accidentals.
Unfortunately, not all instruments could keep up here. The clarinet, for example (back then still without today's complicated key system) had very serious problems with a vocal correct intonation of the semitones. To avoid these problems, the clarinet was built in different sizes. Each of these clarinets could play different tones cleanly and was therefore specialized in certain keys.

The composer / arranger has to think about it: He has to think carefully about which instruments he would like to use in which tuning. Depending on which notes are to sound, he has to transpose the voices accordingly.

For example, if you want to have all instruments play in unison (= sounding the same), it should look like this:

But be careful: Instruments of different moods (e.g. Ces and B flutes) cannot easily play together despite having the same notes. Here one side has to transpose accordingly! Especially in the example mentioned this can get hairy, because it means that a group has to play exactly one semitone higher or lower and that means a lot of accidentals ...

With brass instruments, the basic pitch is the tone that is the lowest tone of the natural tone series that can be played with this instrument by overblowing. It is unimportant whether the lowest note of the natural tone row can also be played.
What counts is the series of natural notes that sound without actuating any valves or without pulling out the trombone slide.
What is meant, of course, is the series of natural notes that actually sound, not the one that is notated.

With woodwind instruments, the basic tuning is the tone that is created by closing all normal keys or finger holes, i.e. practically the lowest playable tone.

Which term is interpreted and how, often also depends on the point of view (i.e. on the instrument you play). A trombonist is more likely to be convinced by the designation of the basic tuning, while a clarinetist pursues the transposition idea. In case of doubt, the ears should be used.

Diatonic instruments are instruments that cannot play all semitones, but only produce the tones of one key (or possibly a second "minor key"), such as the harmonica or the tin whistle (the other instruments are called "chromatic instruments" and are, by the way nowadays clearly in the majority).

The corresponding key is indicated by an addition, e.g. Tin Whistle "in D major". For complete confusion, some leave out the addition "major" and then it just means tin whistle in Dalthough the tin whistle is not a transposing instrument. 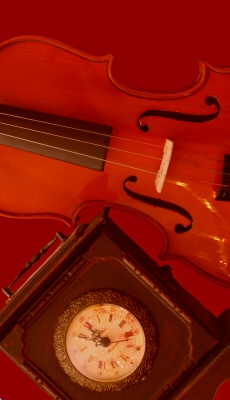