Cutco knives can be sharpened

If you cut in the air, the sharpness of a Japanese paring knife would last 10,000 cuts. By using a cutting board, the number is reduced to 400.

Keeping in focus and Sharpening knives is one of the basic exercises of the cook, as fast, precise and injury-free work is only possible with properly cared for tools.

It would of course be best not to let knives get dull in the first place. The service life of the cutting edge can be extended considerably by using suitable supports.

Boards made of plastic and wood are equally suitable as a base. Both have advantages and disadvantages. Extremely hard surfaces made of glass or stone are absolutely not suitable. Anyone who uses this can stop reading here. Such a hard surface can dull any knife after a few cuts.

Combinations of hardwood boards and flexible cutting mats from Kai or Herder have proven successful. The board serves as the basis for this, and cuts are made on the soft mat, which, depending on use, is replaced after a few months or years. 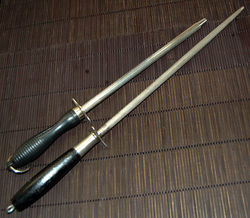 The very thin edge of a knife folds during use, which causes the knife to lose its sharpness. With the help of a straightening steel that does not remove any material, the cutting edge can be straightened up again and the sharpness restored. Outside of the professional environment, sharpening steels are not widespread, as their use only makes sense with very well-cared for knives. Sharpening steels with a sharpening surface made of sapphire, diamond or ceramic, so-called cutting steels, are suitable for private households. These steels not only straighten the burr, but also remove some of the material, which thins the cutting edge and thus sharpens it again.

The usage is the same for both types. The knife is placed at an angle of about 20 ° at the bottom of the steel and pulled off from the back to the front along the steel. Then the side is changed and the process is repeated three or four times. Since the movement is away from the body, there is no risk of injury.

Sharpening steels of any kind are not suitable for Japanese knives with a one-sided bevel because of the specific blade geometry.

With regular use, sooner or later the point at which every knife has to be sharpened will come about. Each blade has a basic grind that is applied at the factory or by the knife maker and defines the basic geometry of the knife. When resharpening, the lowest part of this cut, the so-called bevel, is reground. The selected grinding angle is decisive for the other properties of the knife. Basically, the competing properties of "sharpness" and "service life" of the blade have to be brought into harmony, because the thinner and more acute the cutting edge, the sharper the knife will be, but at the same time it will also be more sensitive.

With the grinding service [edit]

The simplest measure is to use a professional sharpening service that all German knife manufacturers and specialist shops offer, often also for knives from other manufacturers.

Stray scissors grinders, whether as a bell brigade or at markets, are not recommended without exception. Tip: fly when sharpening knives No way the sparks. 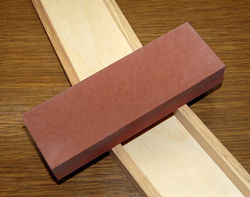 The traditional abrasive is the so-called bench stone or water stone. A cuboid made of natural or man-made stone with abrasive properties.

Sharpening with the bench stone takes some practice, as the knife has to be moved over the stone at a constant angle. After an hour or two with a few cheap knives, however, you usually get good results. During a test by the NDR[1] an amateur achieved a result superior to the mechanical grinding system with his very first attempt.

Beginners should start with a 1000 grit stone, which is usually accompanied by adequate instructions for use. If you mark the bevel with a black felt-tip pen, you can see immediately whether you have hit the correct angle.

It is important to remove any wiry burrs after sharpening the blade. To do this, the blade can be pulled a few times through a piece of hardwood or a cork[2]. More advanced users can polish the burr with a finer stone, grit 4000–5000.

The bench stone is the only common method of sharpening knives that are sharpened on one side.

Detailed information on sharpening with bench stones is available from messer-machen.de.

Sharpening systems from Spyderco (Sharpmaker), Lansky (Lansky Sharpening System) or Gatco (Gatco Sharpening System) work on a similar principle as bench stones, but keep the sharpening angle automatically, which is why they can be used productively by every beginner. This simplification comes at the cost of the disadvantage that, depending on the system, only two to five predefined angles can be used, which in the worst case do not fit the knife.

Mechanical sharpening systems work either by cutting, with two angled blades pulling chips from the knife, leaving behind a more or less sharp edge, or with ceramic rods or discs, which have a grinding effect.

Due to the very high loss of material and the hardly satisfactory results, high-speed sharpeners cannot be recommended. The sharpening versions of Fiskars and Ikea have a similar structure and are definitely suitable for sharpening cheap supermarket knives and the like. Due to the fixed sharpening angle and the still coarse grinding, these systems are not recommended for expensive, forged knives.

Electrically powered grinders look great on TV. That's why they should stay there.

A decent, forged knife that can last a lifetime is available from around € 40. If you invest the same amount again in the maintenance of the knife, you will have taken care of cutting technology for decades.