VPN for China: With these providers you bypass the Great Firewall 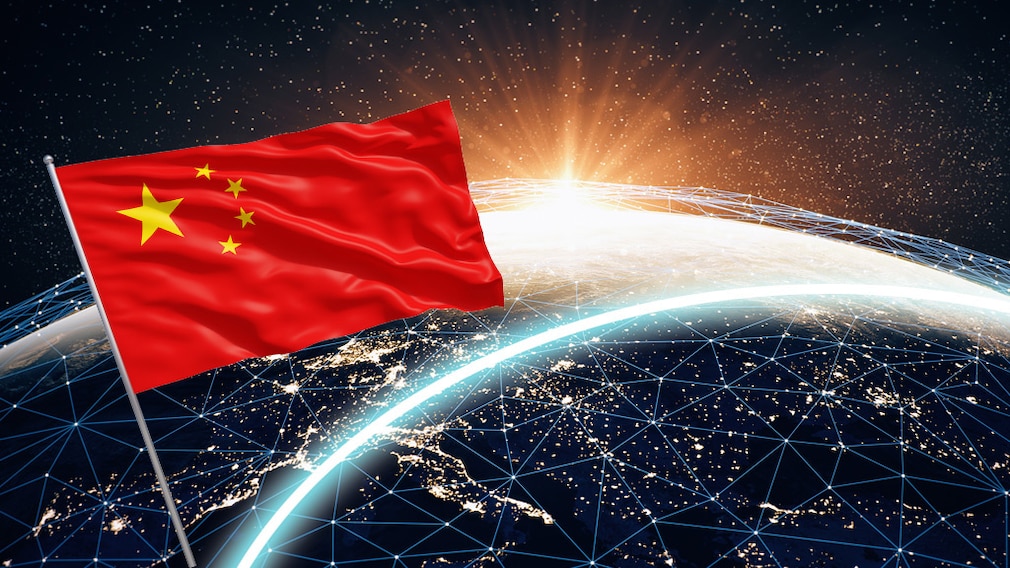 Quite a few western sites and services can only be reached via VPN in China.

The Great Wall of China has long since served its purpose as a border fortification. The imposing structure no longer scares people off - on the contrary: Thousands of tourists travel to China every year to marvel at the ancient bulwark. But China now has a new wall, but hardly anyone would come because of it: We are talking about the Great Firewall. The so-called "Project Golden Shield" draws the boundaries on the Internet closer. Those who live in China cannot really move freely on the World Wide Web; thousands of Western websites and services are inaccessible. Of course, this not only affects the 900 million Chinese who are online, but also foreign business people or tourists who are currently in the country. Anyone who nevertheless wants to move freely on the Internet and is dependent on blocked services, for example to communicate with their family via Facebook or WhatsApp, needs a virtual private network - VPN for short. In the following paragraphs you will learn what that is, whether VPN is legal in China and which are the best VPNs for China.

VPN in China: why do you need it?

For years, China has been exhibiting increasingly restrictive Internet policies - state censorship is the order of the day. Many websites from the west are either completely blocked or can only be accessed in a specially adapted, more precisely: censored Chinese variant, which is the case, for example, with the Chinese-language Wikipedia. Anyone who travels to China unprepared and wants to access their usual services such as Google Maps, Mail or Twitter will be caught off guard because these pages are simply not accessible. There is no alternative: people in China who want to communicate fully with the rest of the world depend on VPN. VPN very simple: A PC, smartphone or tablet connects encrypted to a VPN server abroad, which in turn calls up the desired pages and services and sends them back to the user.

How does VPN work?

It works like this: Before an Internet user calls up a website or a web service, he starts a VPN client on his device. This client establishes an encrypted tunnel between the user's device and the page he wants to visit. For the entire duration of the Internet session, the VPN client remains active in the background and routes the Internet data traffic via a VPN server abroad - in this case outside of China. The foreign VPN server, for example in Germany, calls up the desired page on behalf of the user and forwards it to him in encrypted form. In principle, it is as if you are in the country whose server location you have chosen. In a VPN tunnel, the origin and identity of the user is also concealed, since the IP address is exchanged for a suitable, in this case non-Chinese IP address. In plain language: The Chinese providers, the Internet police or other undesirable persons have no clue who is chasing what through the encrypted data tunnel and where the user is.

These services are banned in China

The number of blocked pages is quite high. Almost all Google services are censored. This means that you cannot use Gmail, Maps, or YouTube in China. In addition, Twitter, WhatsApp, Instagram, Snapchat, Blogspot and SoundCloud are taboo in the land of the Great Wall. Anyone who wants to read the "New York Times", "Time", "Reuters", "Süddeutsche Zeitung", "Frankfurter Allgemeine Zeitung" or "Le Monde" fails because of the Great Firewall. Most well-known sites with pornographic content, such as PornHub, are also affected by the ban. If you would like to know more precisely which pages are currently blocked in China, visit this page. Check-Button.

There are a number of VPN services that (still) work in China, but not all of them survive the deep packet inspection of the Chinese authorities. This technology is a common method of successfully fighting viruses and spam, for example, but it can also be used for censorship and surveillance purposes. The following VPN services offer special features that qualify them for use in China (and other authoritarian states such as Turkey, Iran or the United Arab Emirates). It is important that you install the relevant service before you travel. In the destination country, you usually no longer have the option of downloading and setting up the VPN service. You should also note that the obfuscation functions always come at the expense of the connection speed. Streaming services like YouTube could be slowed down by this. These are the best VPN services for China: NordVPN: When you click Obfuscated servers you will be connected to the nearest stealth server.

The test winner (grade: 1.3 - very good) in the large comparative test also does an excellent job in China. In order to surf the net unhindered in the People's Republic, select the special stealth servers (obfuscated servers) from NordVPN, which were set up for this purpose. They disguise the data traffic in such a way that it appears like normal HTTPS traffic and therefore cannot or can only be detected with difficulty by the deep packet inspection. The stealth server must first be activated in the settings. To do this, switch to the settings menu and click on Extended and put the switch next to it Disguised servers on At. In some cases this switch is grayed out and therefore inactive. To make it selectable again, you have to go to the settings menu under Connect automatically the switch Select VPN protocol and server automatically on Out put. A selection for the VPN protocol to be used now opens below this. Choose OpenVPN. The entry can now be found in the main menu Obfuscated servers. There you select one of the stealth servers and connect to it.

Surfshark: Activate the No-Borders mode with a simple click in the settings.

Surfshark took second place in the large comparative test of the best VPN services (grade: 1.4 - very good) and is also the price-performance winner with a term of two years. The service, based in the British Virgin Islands, offers two promising methods of successfully evading the watchful eyes of the Chinese authorities. The so-called no-borders mode offers a number of special servers that are designed for regions with restricted internet. To activate it, click in the settings Extended and put the switch on NoBorders on A.
Alternatively, you can also use the Shadowsocks protocol. Here the data traffic is "trimmed" to HTTPS. Since it is essentially a proxy protocol, obfuscation is only active within the browser; the protection does not extend to other applications. If unhindered surfing is paramount, Shadowsocks in China is a suitable choice. Shadowsocks must be configured separately on the Surfshark website before the protocol can be used. Detailed instructions (unfortunately only in English) can be found in the account area under equipment and Extended. 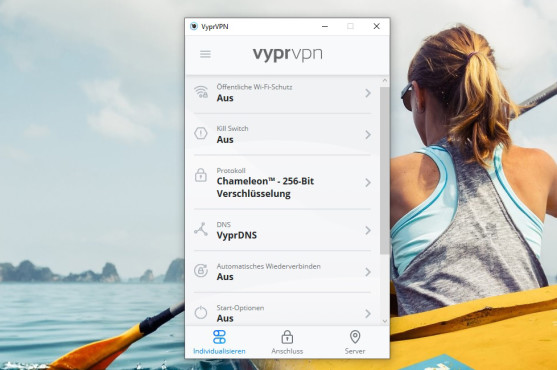 VyprVPN: Select the Chameleon protocol in the settings under "Customize".

VyprVPN offers good Swiss workmanship and was able to convince with a grade of 1.9 (good) in the test. In addition to its good privacy functions, the VPN has its own specialty, which is particularly interesting for China travelers (as well as for trips to other restrictive countries such as Saudi Arabia or Iran): The VPN service has an in-house development called Chameleon in its program, to move freely in countries with restricted internet. Chameleon is based on the OpenVPN protocol, but has been expanded to include special obfuscation techniques. To activate the protocol, you just have to go to the settings of the program under Individualize the option Chameleon protocol and then connect to the desired server. This applies to all program versions, i.e. not only Windows but also macOS and Android.

Why does VPN still exist in China?

The Chinese government is of course not unfamiliar with VPNs, but they do exist. You may be wondering why that is? Quite simply: As is so often the case, this is also about economic interests. Many international companies would be lost without a VPN. They depend on secure connections to their business partners outside of China - especially when it comes to strictly confidential company information. A VPN data tunnel is the method of choice, as it seals off sensitive information from strangers' eyes. And this is exactly why VPN is not banned in China. Using VPN is a gray area in China.

Is VPN a criminal offense in China?

The use of virtual private networks is not prohibited, but it is also not explicitly permitted. It is simply a gray area. In principle, VPN is also used to communicate securely - companies in particular are allowed to do so. Calling up unwanted sites via VPN, on the other hand, is logically not that popular. In order to enable use by companies, the regulating authorities have released various VPN services - but not without installing a back door: The permitted services must create connection records (logs) and report suspicious or prohibited activities or disclose them to the authorities. And what about expats, for example - business people who temporarily live in China? Well, they too are affected by the Great Firewall. So far, however, there are no known cases in which expats or tourists had to fear severe restrictions or even fines because they used a VPN service. If you don't have a VPN, you have to take detours. For example, some large international hotels, such as the Grand Hyatt in Shanghai, are to provide hotel guests and, in some cases, visitors with uncensored internet. After all. But, of course, it is much more convenient with a VPN service that allows you to surf the Internet freely regardless of uncensored and fairly rare hotspots.

VPN: other areas of application

As already mentioned, data is sent and received in encrypted form within a VPN. VPN services are also valuable for every user who accesses the Internet via public hotspots, e.g. in cafes, fast food restaurants, train stations or hotels. These free WLAN accesses are often not particularly protected. Hackers can easily fish user data - very annoying when it comes to bank accounts, private messages or important passwords. Here it makes sense to channel everything through a VPN data tunnel. In addition, VPN is great for connecting to your home network or your company's network. Remote work, controlling smart home devices or streaming photos and videos from your own NAS drive are just a few options that VPN offers. Speaking of streaming: Anyone who wants to netflix in China or access the media libraries of ARD, ZDF & Co. needs VPN access to bypass geoblocking.