What is the most scalable blockchain

The Bitcoin 1x1 - Part 6: The Scalability of the Blockchain

In the last contributions of the Bitcoin 1x1, in addition to the technical conditions, the intrinsic motivation of the Bitcoin inventor and the first Bitcoin supporters were explained. The main reason for the invention of Bitcoin was the desire for a completely digital, decentralized means of payment, which should be used as an independent alternative to conventional traditional currencies. Over the past few years, more and more Bitcoin enthusiasts have shared the goal of an independent currency. The increasing attention in the entire crypto sector and the associated increased volume of transactions also crystallized one of the biggest weaknesses of the Bitcoin protocol: its scalability.

Scalability in the context of Bitcoin is understood to be the limitations of the blockchain in processing multiple transactions. As already described, individual transactions are collected in a block. The maximum size of a block is clearly defined in the Bitcoin protocol. The general conditions of the block size and block generation of the Bitcoin protocol limit the average block generation time to 10 minutes and the maximum block size to 1 megabyte. Due to these restrictions, Bitcoin is limited to an average of a maximum of 7 executable transactions per second (TPS), which led to discrepancies in the Bitcoin community very early and was largely decisive for the Bitcoin cash fork. Ethereum's blockchain is able to process almost 20 TPS while the payment provider VISA is able to handle up to 45,000 TPS.

The crypto community debates wildly about the theoretical TPS limits, actual TPS average values ​​and possible solutions to the scalability problem. A brief overview of the TPS of various blockchains and payment providers offers a good feeling of the current limits of the scalability of the respective systems. This refers to the maximum possible transaction speed specified by the developers (Claimed Transactions per Second (CTPS)). 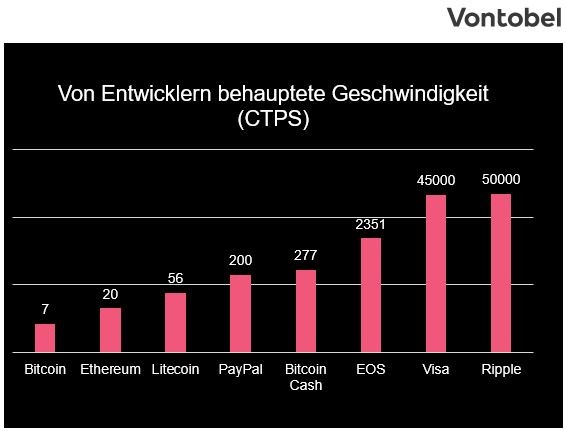 Why is it so difficult to expand scalability?

Bitcoin, just like Ethereum, attaches great importance to ensuring that the respective blockchain logs transactions and ownership of Bitcoins at all times and without the help of a central entity. However, as the number of users increases, it becomes more and more difficult to maintain the balance between decentralization and accurate logging. Especially with regard to the everyday use of Bitcoins for payment within apps or for use in everyday situations, it is currently unlikely to log every payment directly, decentralized and exactly within the Bitcoin blockchain.

The difficulty of the above balance lies in the functionality of the proof-of-work approach. The Bitcoin protocol depends on all network participants for the «processing» of the generated blocks. As Bitcoin grew in popularity and everyday use of Bitcoin, the amount of blocks would increase enormously, which would steadily increase the average time it takes to complete a transaction. In order to counteract this slowing down of the protocol or to make the protocol even faster, the size of the individual blocks would have to be increased in order to be able to verify more transactions within a block. As the block size increases, however, there is the risk that only a few participants - the large million dollar Bitcoin miners - will be able to mine large blocks in a short time. Due to this increasing focus of verification sovereignty in the Bitcoin protocol, decentralization is being lost more and more.

That is why blockchain experts try to find solutions that keep the aforementioned relationship in balance and still increase performance.

Solution approaches in the Bitcoin protocol

A first approach to solving the scaling problem was already carried out by the community on August 1, 2017 as part of the Bitcoin Cash hard fork. The Bitcoin Cash Blockchain created in this way is able to break down larger blocks and thereby verify multiple TPS - with the risk of increasing centralization.

Bitcoin core developer Pieter Wuille installed the "SegWit" transaction format ("Segregated Witness") in the form of a soft fork within the Bitcoin protocol on August 24, 2017, just three weeks after the Bitcoin Cash hard fork. With SegWit, the block size of a single block can be increased from the conventional 1 MB to 4 MB. This is made possible by separating the signature data from Bitcoin transaction processes. By removing certain transaction information, its data capacity can be used to bundle additional transactions per second. Meanwhile, more than 40% of all Bitcoin transactions use SegWit addresses - with increasing acceptance.

Next in Bitcoin 1x1

The seventh part of Bitcoin 1x1 deals with the various advantages and disadvantages of crypto currencies (especially Bitcoin). Bitcoin is the pioneer of a new technology and is still the most popular cryptocurrency of all. Nevertheless, there are various outdated structures within the framework of the Bitcoin protocol, which may put Bitcoin in the shade compared to more new types of cryptocurrencies. More on this in Part 7 of Bitcoin 1x1.