How canyons are made 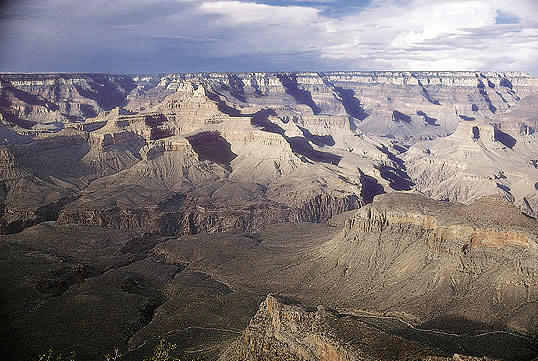 The Grand Canyon in northwest Arizona is one of the most spectacular landscapes on earth. A 350 km long, over 1.5 km deep incision with impressive rock formations and many almost vertical canyons cuts the Colorado Plateau. The edges of the canyon are 2,133 m (southern edge) and 2,430 m (northern edge) above sea level, the Colorado itself flows about 1,700 m lower.

At first glance, two different parts of the canyon can be seen: in the depths of the inner canyon, made of dark rock, mostly gneiss and crystalline slate from the earliest years of the earth, above that are thick sedimentary rocks (outer canyon) of various ages (Cambrian to Carboniferous) and of different colors and structure. The upper edge is formed by over 200 m thick layers of limestone from the Permian. The almost undisturbed horizontal or only slightly inclined storage of these sediment packages is striking.

Formation of the canyon

Two different processes were responsible for the formation of the canyon: the elevation of the so-called Colorado Plateau in the Middle Ages and in the New Earth Era (especially in the Tertiary) and the erosion force of the Colorado.
Since the formation of the Colorado, the area of ​​today's Colorado Plateau has risen. So the Colorado was forced to gradually cut through the various younger and older layers of sediment into the basement.
The Colorado rises in the Rocky Mountains at an altitude of 3,000 m, has a steep gradient (600 m within the national park) and thus a high erosion force. Particularly high erosion capacities were observed during the Pleistocene glacial periods and in the last 1.5 million years during periods of increased water flow, e.g. B. after melting snow, triggered. During these phases, the river carried around 500,000 tons of rubble, stones and mud every day. With these "weapons of erosion" he worked his way into the depths. Since the individual sedimentary rocks are of different hardness, they were also able to withstand river erosion differently. This resulted in the stair-like gradations of the slopes, which are typical of all canyon landscapes: the vertical walls consist of harder, the sloping gradations of soft rock.

Back to the terrace
<?