How spiders weave their webs horizontally

The German forest can do more than rustle 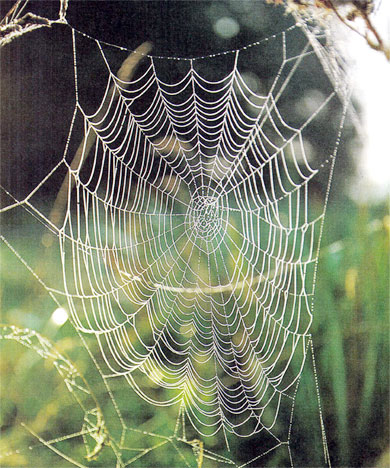 1 - spoke and frame construction. The spider releases a silk thread from the warts on its abdomen. Carried by the wind, the beginning piece of this wind thread - as it is called - can reach an object and stick to it. By pulling briefly, the spider checks the durability of this horizontal thread. While it is producing a new thread, it works its way to the middle of the wind thread, whereby this first thread is immediately consumed up to the middle of it (a). Once there, she rappels down to a third fixed point (b): the first three spokes - or radial threads - have emerged. From the center the spider now pulls further spokes and at the same time the frame threads (c). Spiders work economically: often the given thread, the

Scaffolding, consumed and a new thread drawn in.

2 - The creation of the auxiliary spiral. The spider now inserts the so-called auxiliary spiral from the center into the structure created in this way. There are no drops of glue attached to the thread either, it only serves to stabilize the network.