Who died first Jodha or Akbar 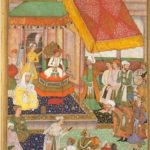 Recently I briefly discussed the portrayal of Mâham Angas in the TV series Jodha Akbar in my article. Today I want to go back to Akbar's wet nurse Mâham Anga, who had a great influence at Akbar's court.

Akbar's father Humâyûn (d. 1556) was forced to live in exile in Persia and Afghanistan due to a military defeat against the Sur dynasty. The Mughal ruler later succeeded in ending the brief interim rule of the Suris and returning to India as ruler. Akbar's mother, Humaida Begum, lived in exile with her husband and left Akbar with Mâham Anga.

Mâham Anga had a total of four sons and a daughter, of which Akbar's milk brother Adham Khân played a major role. When Humâyûn died in 1556, Akbar was only 13 years old. The rule took over Bairam Khân, an important military leader, who was also married to a half-sister Humâyûns. He was able to increase his influence by defeating important opponents of the Mughals.

The fall of Bairam Khan

But Mâham Anga was not without political ambition of her own - she also wanted to bring her son Adham Khân into an influential position. The power struggles at court intensified with the increasing age of Akbar. He no longer wanted to leave power exclusively in the hands of Bairam Khan, but rather to act as ruler himself. Mâham Anga confirmed Akbar in his intention to limit Bairam Khan's power - and so Bairam Khan set out on a pilgrimage to Mecca. In 1561 he was murdered.

Mâham Anga had achieved her goal, she was de facto the ruler of the Mughal court and financially and politically pulled the strings and influenced the decisive networks of the court.

Then Adham Khan made a mistake. After the conquest of Malwa in central India, Adham Khân did not hand over the spoils of war to the Mughal ruler - as prescribed - but kept two young women from the harem of Bâz Bahâdur to himself. When Mâham Anga found out, she had the two women murdered to cover up Adham Khan's misconduct.

Only with the assassination of Ataga Khan did Adham Khan and thus Maham Anga gamble away Akbar's trust. Akbar personally killed Adham Khân - and Mâham Anga is said to have felt his actions were right. However, she died shortly afterwards - and is buried together with her son in a grave in Mehrauli (Delhi).

Some historians, e.g. I.H. Qureshi describe Mâham Anga as a cunning, scheming power politician who did not shrink from murder. In her book “Indian Feminism” Rukhsana Iftekhar wrote that this description is not really accurate - and after all, these behaviors are accepted in men.

What is your opinion?

An overview of our contributions to Mughal history