Who was Jim Corbett

Jim Corbett, actually Edward James Corbett (* July 25, 1875 in Nainital, India; † April 19, 1955 in Nyeri, Kenya) was a British hunter and conservationist who has become famous for killing man-eating tigers and leopards in India. Corbett was a colonel in the British Indian Army. Nonetheless, he was frequently called upon by the government of the United Provinces (now the Indian states of Uttar Pradesh and Uttarakhand) to kill tigers and leopards that had killed people in the villages of the Garhwal and Kumaon region.

The Corbett family were of Irish descent and moved to Nainital in 1862. Jim was born in Nainital, the 8th child of Christopher and Mary Jane Corbett, and spent his teenage years there. When he was 4 years old, his father, who was the head of the local post office, died.

From an early age, Jim was enthusiastic about the nature and wildlife of his Indian homeland and learned at an early age to identify bird calls and read tracks. Before he turned 18, he had to leave school and found a job with Bengali and Northwestern Railways, first as a fuel inspector in Manakpur, Punjab, then as a carrier at the Mokameh Ghat transfer station in Bihar.

On the hunt for "ogres" 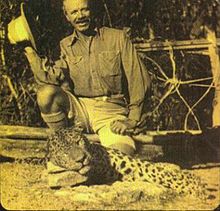 Between 1907 and 1938, Corbett had 33 feared cannibals - 19 tigers and 14 leopards - like the one Champawat tiger, the Rudraprayag leopards, the Tiger of Chowgarh and the Panar leopard shot who allegedly killed more than 1,200 people together.

From hunter to conservationist

In the late 1920s, Corbett bought his first movie camera and began filming Tiger. Even if he knew his way around the jungle well, it was quite exhausting and tedious for him to get good pictures, because the animals were extremely shy[1].

During these years, Corbett not only studied and pursued wildlife, he increasingly worked to protect India's wildlife and their habitats[2]. Together with Frederick Walter Champion, he was instrumental in founding the first Indian national park in Uttarakhand (1935), which was renamed in his honor Jim Corbett National Park in the 1930s.

He became active as a writer after he retired. In his books Man-Eaters of Kumaon, Jungle Lore and he tells others about his hunting adventures.

After India gained independence in 1947, Corbett and his sister Maggie moved to Nyeri, Kenya. He continued to work as a writer and endeavored to protect wildlife. A few days after reading his last book Tree tops completed, he died of a heart attack and was buried in Nyeri.

In 1968, one of the five surviving subspecies of tigers was named after him: Panthera tigris corbetti, Indochinese tiger, too Corbett's tigers called.