The Vatican and the Holocaust: Inspection of files on Pius XII.

Historians are allowed to view the papal archive from the time of the Holocaust for the first time. Did Pope Pius XII. done everything to save Italy's Jews? 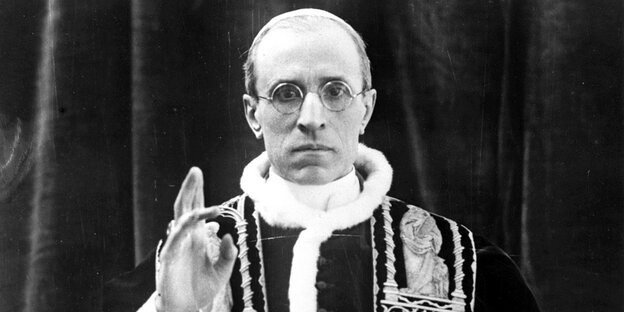 Soon we will know more about his attitude towards the persecution of the Jews: Undated photo of Pope Pius XII. Photo: epa / dpa

ROMEtaz | Was he a silent opponent of the Nazis or someone who did not want to position himself publicly because he was only concerned with the welfare of the Catholic Church? On Monday the Vatican opened the files of Pius XII, the Pope who was accurately elected to office on March 2, 1939, 81 years ago.

The Pope who closed his eyes to the persecution of the Jews: Rolf Hochhuth spread this view in 1963 with his play “The Deputy”. If one could believe Hochhuth, then Pius XII was drawn to it. in the face of the deportation of more than 1,000 Jews from Rome, to look the other way and to accept the crime in silence. Like Pontius Pilate, the pontifex maximus washed his hands in innocence, guided by the request not to provoke Hitler by protest or even by diplomatic intervention.

The play caused controversy across Europe, and in Italy it was banned by the police just one day after its first performance. But against Hochhuth's point of view, the thesis, represented by historians close to the Vatican, that the Pope, like the allied powers of the anti-Hitler coalition, had no reliable information about the extermination of the Jews.

It was not until Christmas 1942 that he expressed himself publicly, speaking of his concern for the "hundreds of thousands who, through no fault of their own, sometimes only because of their nationality or race, have been subjected to death or extermination". He avoided naming the perpetrators - Nazi Germany - or the victims, the Jews.

Pius XII reacted more than cautiously. also on October 16, 1943, when 1,023 Jews were deported from Rome to the extermination camps. He did not raise his voice in public, he only had his cardinal state secretary, Ernst von Weizsäcker, protest against Germany's Vatican ambassador.

It was not until the end of 1942 that he spoke of his concern for the "hundreds of thousands who, through no fault of their own, sometimes only because of their nationality or race, have been subjected to death or extermination"

Pius ’supporters, however, point out that a few days after the raid in Rome, he himself ordered all Jews in Italy to be hidden in monasteries and other institutions. Thousands of Jews were saved in this way. Rabbi David Dalin even wishes Pius XII. may be recognized as “righteous among the peoples” in Israel.

The historians, who will be allowed to register in the Vatican archives in the coming months and years, hope for clarity from the files of the war years. It will become clear what the curia actually knew about the persecution of the Jews and how it set out its course of action. However, files from the immediate post-war period should also be of interest, when important representatives of the Vatican played a central role in the evacuation of Nazi criminals to Latin America.

Here, too, the question arises: what did Pius XII know. of the work of high-ranking clergy like the Austrian bishop Alois Hudal, who headed the German priestly college in Rome and organized the "rat line" to South America after 1945?