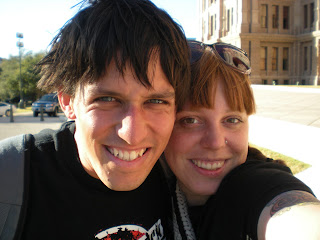 One evening in early August 2002, a street artist and a young lady were sitting in Frederiksberggade, a pedestrian zone in downtown Copenhagen, with painted sheets. I watched the goings-on and I got into conversation with the lady who even asked me to paint. I had time; actually I had come to town to skate the new halfpipe which should be in Fallerparken from now on, but the construction was delayed and so I spent a few days beyond skating in Copenhagen. The lady, Sif, fascinated me, she told me about San Francisco, where she lived, about the world, she was extremely positive and cosmopolitan. She invited me to her apartment in the city center for tea. We spent the next few days together, she took me through the city, we visited Christiania where friends of hers lived in houses with beautiful gardens, we were on the beach, we were skating and in several pubs. It was an unforgettable trip.

A year later we met again in Copenhagen. But then we parted ways, Sif moved to Texas and married, I moved to Germany. There was a short e-mail conversation and then the contact was broken off.

I often wondered what she was doing and tried to find her on the internet, but I was unsuccessful. Suddenly it was possible to search for people with the old family names on Facebook and so I came across Sif, added her and we exchanged ideas. She lives in Austin, a city that I really like, where I wanted to go anyway. So I made a stop in Austin on my US trip at the end of 2010. After I announced my arrival to Sif, she offered me to stay with her.

This was followed by 3 unforgettable days in Austin, which I spent with her and her husband. There was a city tour, we were in a Mexican and a Thai restaurant, I was persuaded to go ice skating (on the roof of a shopping center), we took great photos. The two of them took me to a ditch and a large skate park (Marble Davis) where I had unforgettable sessions, we watched films, I accompanied them on forays through shopping malls and on a dog walk. It was wonderful to experience this great hospitality!

This was an experience that for urban cosmopolitans with a positive attitude there are no geographical boundaries to cultivate friendships. We'll see each other again and this time we don't want to wait eight years!

Sif, it was a great pleasure, thank you very much!

On an early August evening in 2002 a street artist and a young lady sat on Frederiksberggade, a pedestrian zone in the city center of Copenhagen and draw on blankets. I watched their performance and get into a chat with the lady who encouraged me to paint with them. I had enough time. Well, I came to the city to skate it's new Halfpipe whicht should be located infallenparken, but it wasn't finished yet so I spent a view non-skating days there. The lady, Sif, was fascinating. She told me about San Francisco, she lived, and the world, she was positive and open minded. She invited me for a tea at her downtown apartment. We spent the following days together, she showed me the city, we went to Christiania were friends life in small houses with beautiful gardens, we went to the beach, we went skating and we visited a couple of pubs.

A year later we met again in Copenhagen. After that our ways separated, Sif got married in Texas and I moved to Germany. After a short e-mai exchange our contact split.

Often I asked myself what she is doing and tried to find her contact details online, but I had no luck. Abrupt it was possible to search people on facebook with their old family names and I matched Siff. We add each other and wrote messages. She is living in Austin, a city that I really like. So I let Austin became a stop at my US trip in the end of 2010. After I let Sif know that I will make it to the Tex city she offered me to stay at her place.

What follows were three unforgettable days that I spent with her and her husband in Austin. We had a sightseeing, went to a mexican and thai restaurant, they convinced me to go iceskating (on the rooftop of a mall) and we made great photos. They got me a nice ditch and a huge concrete Skatepark (Marble Davis), we watched movies, I joined them shopping at malls and running the dogs out. It was such a pleasure to make an experience with this hospitableness!

This was such an experience that showed me that urban cosmopolitans with positive attitude do not know any geographic boundaries to cultivate a friendship. We will see each other again and won't wait for eight years until the next time!

Sif, it was such a pleasure, thank you so much!