Are there perfect places in nature

Out of this world: visit the most beautiful places on earth

Rumbling volcanoes from which glowing, red lava flows pour into the ocean, impressive glaciers at the end of the world and huge holes in the ocean floor - the list of natural wonders is almost endless. Here are some of the most beautiful places in the world that have amazed and puzzled researchers and scientists to this day. 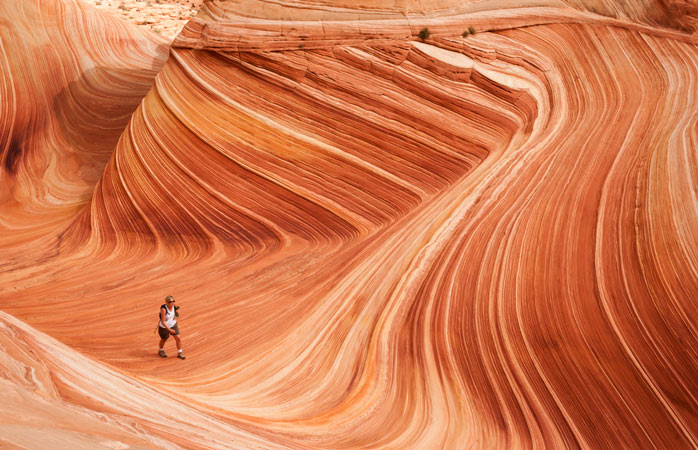 If the Catalan surrealist Salvador Dalí had painted natural scenes, this would have been a groundbreaking work. Ocher and amber-colored layers from the Jurassic period lie on top of each other here and form a wavy background that has become a popular destination for photographers and hikers.

However, you need a permit to visit this protected landmark and due to a lottery procedure by the Bureau of Land Management this is not exactly easy - so start your registration early. If you don't get a permit, don't worry, Arizona is a state that boasts numerous other impressive natural wonders, including Antelope Canyon and the Upper Grand Canyon.

Find a flight to Page
Read more: Here are our tips for the perfect road trip through the Southwestern United States 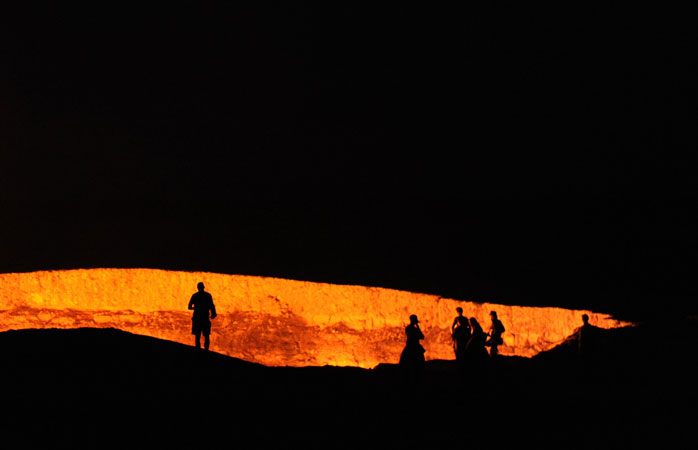 The small village of Derweze in Turkmenistan gained notoriety about 40 years ago thanks to the work of Soviet geologists who dug into a cave filled with natural gas. To stop the gas from leaking, a fire was lit to completely burn the gas in the cave. The geologists expected the fire to burn for a few days.

Today, 40 years later, the inferno is still raging: over a width of 70 meters in the middle of the desert, the flames continue to flicker cheerfully, so that the locals nicknamed the place “Gate to Hell”.

Find a flight to Ashgabat 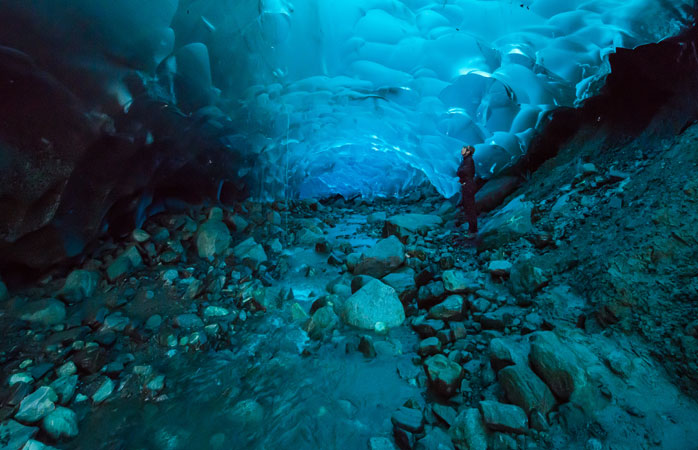 Because of their constantly changing nature, glaciers have a lot in common with humans. Now, as the composition of the ice in the Mendenhall Glacier changes due to global warming, its ice caves, which are a result of the melt water flowing under and hollowing out the ice sheets, are also changing.

The thinner the ice in the cave ceiling, the lighter its shade of blue, which is the only source of light in these parts of the cave.

However, you have to earn the visit to these caves with some effort: First you have to paddle in a kayak to the glacier or hike there, then climb it with crampons and finally descend carefully into its subterranean depths.

Find a flight to Juneau 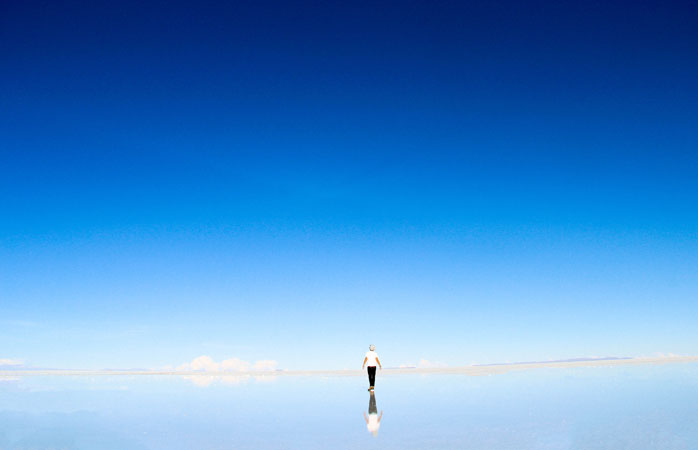 It doesn't rain often here, but when the time comes, the huge salt surface is transformed into a heavenly mirror that seems to extend into infinity and actually covers an area that is only slightly smaller than Jamaica. Salar de Uyuni is also one of the flattest places on earth - a property often used for optical illusions (forced perspective) in photography. The salt flats are close to the Andes ridge, 3,656 meters above the sea floor (which means it can get quite cold here and the air is thin - so prepare accordingly).

Find a flight to Oruro 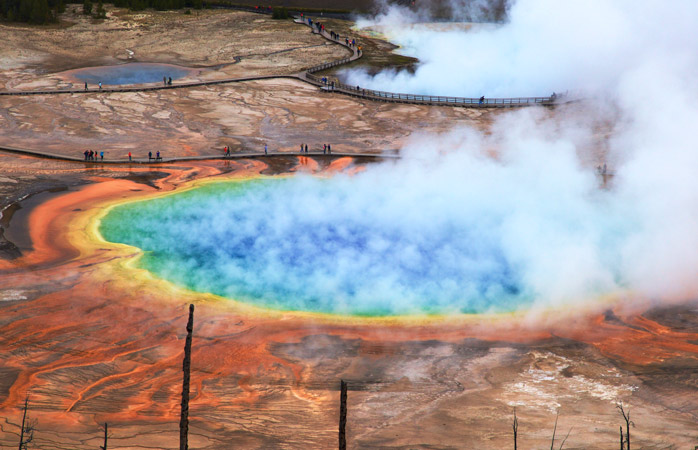 The vibrant colors of this thermal spring correspond to those of the tiny rainbow that forms when light breaks in a geometric prism - hence the name. The red, orange, yellow, green and blue colors are created by the different types of bacteria that live in the mineral-rich, hot water, the temperature of which can reach 85 ° C. The Grand Prismatic Spring has a diameter of almost 113 meters, making it the third largest thermal spring in the world.

Find a flight to Jackson Hole 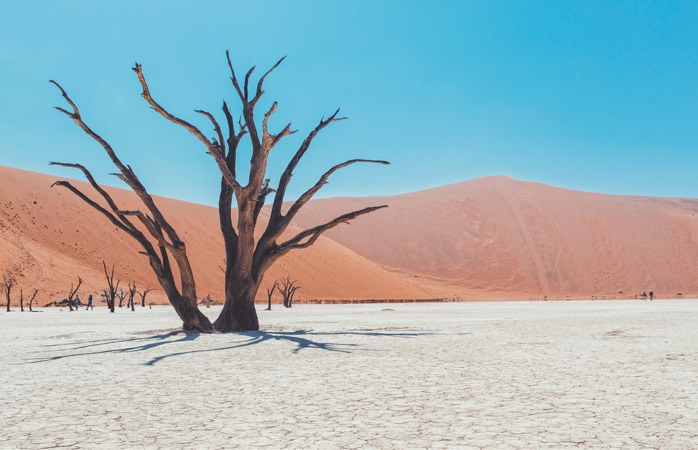 Deadvlei is an artificial word that is made up of the English word "dead" and the Afrikaans word "vlei" and translated means something like "dead sink". The acacia trees that are scattered over the decayed landscape have been standing here for more than 600 years as dried up skeletons, which here, in one of the driest places in the world, lack the moisture that would be necessary to rot. This parched patch of earth is also close to some of the largest sand dunes in the world, rising up to 383 meters from the desert floor.

Find a flight to Windhoek 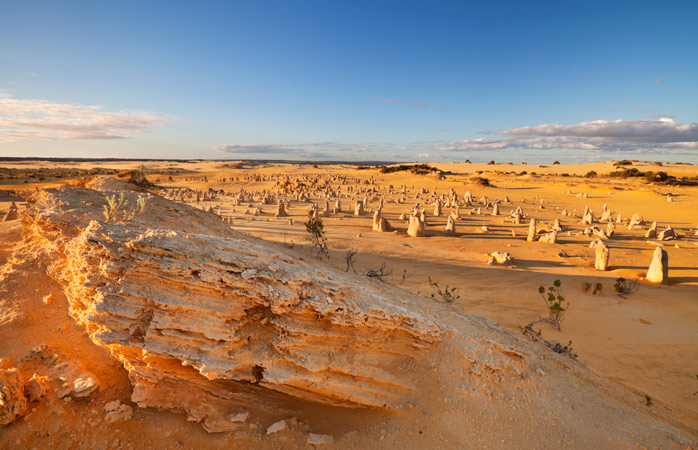 The "Pinnacles" in the Namburg National Park are often compared to gravestones, termite mounds, fingers or other body parts. The limestone pillars are surrounded by a certain mystique, especially at dusk, when the darkness is only broken by the moonlight and the landscape appears as an eerie, ghostly wilderness. There is still controversy among scientists about the origin of the Pinnacles, but it is agreed that some of them have been here for 500,000 years.

Find a flight to Perth 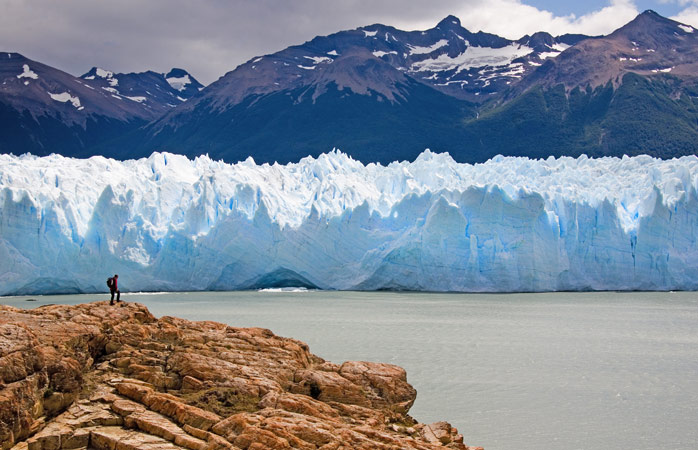 The Perito Moreno is 28 kilometers long and 4.8 kilometers wide, making it one of the few glaciers in the world that grow. In the summer months you can often see huge chunks of ice falling into the Argentino Sea, while the gigantic ice masses cast a huge shadow over the icy landscape in winter.

The barely inhabited region in Patagonia is an eerily quiet, mystical place where the Perito Moreno impressively displays the astonishing wonders of nature.
Find a flight to El Calafate 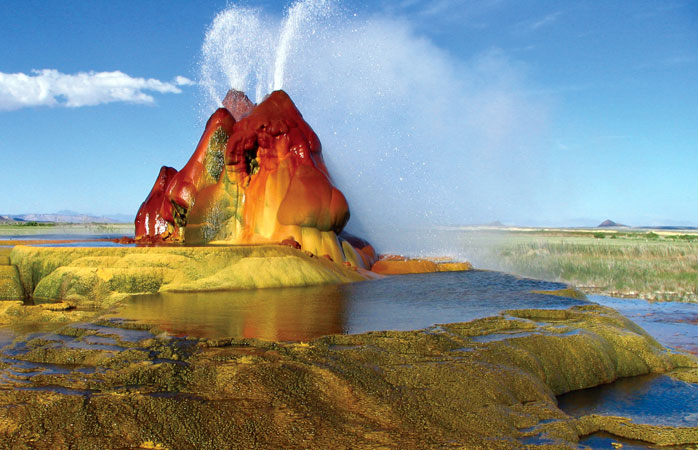 Let's go back to 1916: A ranch owner is digging a well. Unsuspecting, he breaks through the wall to a cavity that is filled with geothermal water. The man gives up the well and lets nature take its course. 101 years later we are standing in front of a beautiful geyser, which has been ejecting minerals in bright colors from the underground to the surface since then.

Today the geyser is part of a 1,500 acre area owned by the organizers of the Burning Man Festival and there is talk of long-term opportunities, the geyser and its surroundings as catalysts for the festival's cultural influence beyond Black Rock's borders City beyond to use.

Find a flight to Reno 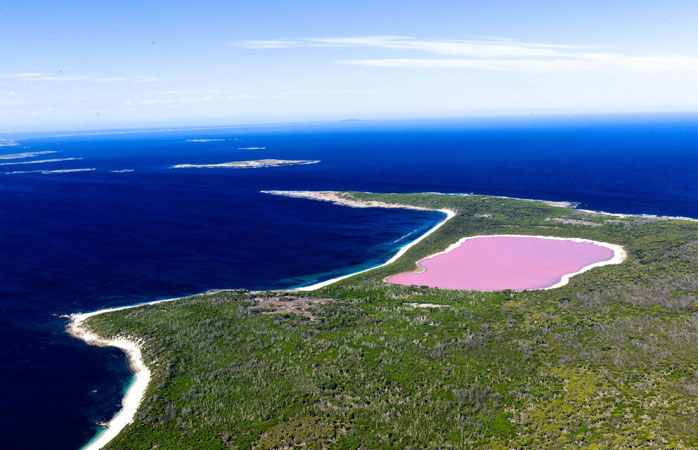 Lake Hillier, also known as the Pink Lake, is a strangely colored body of water on Middle Island - the largest island in the Recherche Archipelago, off the coast of Esperance in Western Australia. The 600 meter long lake is only separated from the Southern Ocean by a narrow strip of sand dunes with sparse vegetation.

While many are still puzzled about the exact cause of the pink coloration, there are indications that it comes from a dye produced by bacteria that live in the salt crust of the lake. Swimming in the water is harmless to health, but it is not that easy because the salt content is similar to that of the Dead Sea, so you will probably be more likely to float on the surface of the water if you dare to approach the colored lake.

Find a flight to Esperance 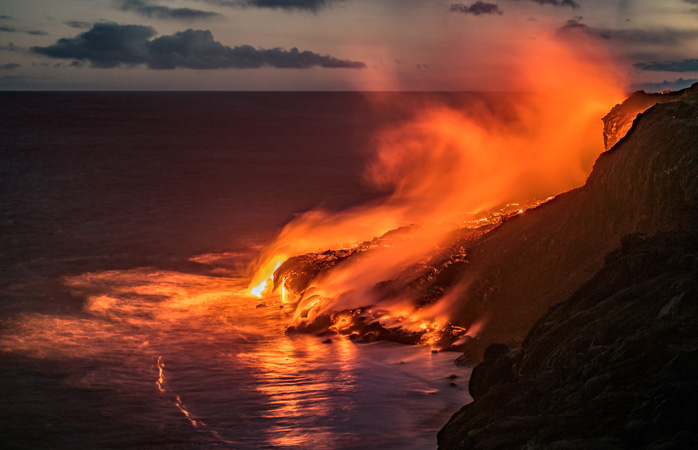 The indomitable Kilauea volcano erupts from time to time in 1983 and then pours rivers of molten lava into the Pacific, where the hot mass meets the cool water in a dramatic way. Thanks to various tours under professional guidance, who accompany you over the burned pastures as close as possible to the volcano, you can watch this impressive event from a distance. However, you should definitely not go to this region alone, as the eruptions of the volcano are unpredictable.

Find a flight to Kona 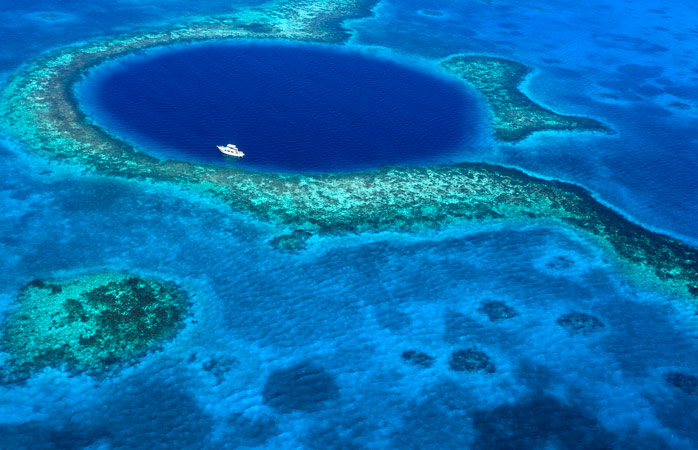 The gigantic underwater cave of Beliz was created during the Ice Age, when natural forces formed an almost circular hole in the sea floor. The Great Blue Hole is not only great to see from the air, it's also a great place to dive thanks to the diverse marine life that divers explore from near and far.

However, you have to have at least 24 dives behind you, because it takes a certain degree of skill to explore the stalactite-riddled cave in the depths of the ocean. Or you can grow your gills and do it like freediver Guillaume Néry, who has dived several times down and back into the cave without breathing apparatus.

Find a flight to Belize City 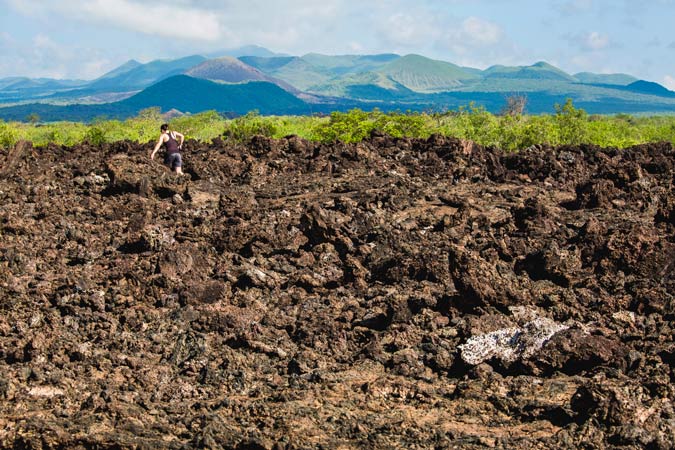 According to a local legend, the lava fields are the work of the devil ("Shetani") himself, who emerged from the earth a few hundred years ago. The fields stretch 60 kilometers across the savannah, creating an eerie landscape in a remote area of ​​the Tsavo National Park, which in itself is already a region full of myths and superstitions. The predators here don't like to be disturbed, so if you leave your safe jeep you should definitely do so in the company of a park ranger who you can hire for this purpose.

Find a flight to Nairobi 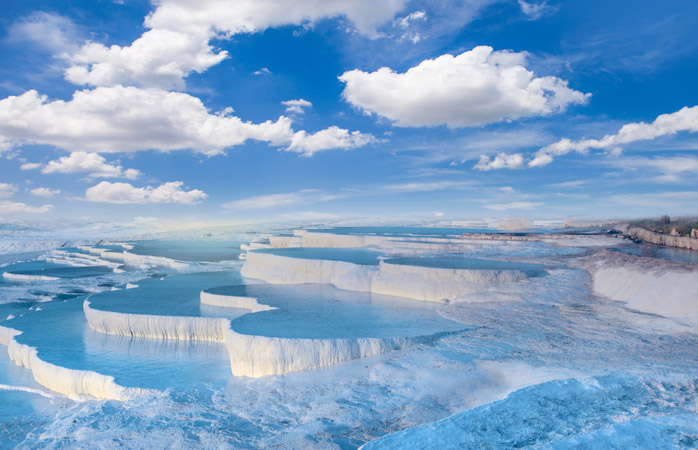 Pamukkale, which - very poetically - means something like "Watteburg", is one of the most important natural spectacles in Turkey. Thermal springs and huge white limestone terraces that stretch across the hill are a truly gorgeous sight. Be careful when you step on the limestone terraces (barefoot!), Because shoes can easily damage them. Pack your swimming gear and enjoy a swim in the clear water of this UNESCO World Heritage Site. While in Pamukkale, you can also visit the nearby Roman ruins and museum in Hierapolis, a place that was once a sacred ancient city, very close to the natural baths. 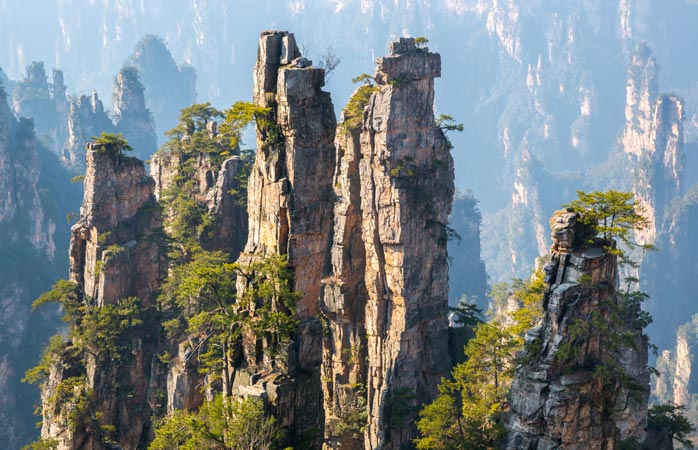 You might think that the giant stone pillars in Zhangjiajie National Forest Park come from a galaxy far, far away. The film Avatar, which was released in theaters in 2009, showed some scenes that were inspired by the same rock pillars found in the province of Hunan, which led to the renaming of the 1,080 meter high Southern Pillar of Heaven.

Today it is known as "Avatar Hallelujah Mountain" and is a towering beauty that, together with many other formations, forms an impressive silhouette. From the Zhangjiajie Grand Canyon Glass Bridge - the longest and highest glass pedestrian bridge in the world - you can look down in amazement and, you will have guessed it, put your fear of heights to the ultimate test.

Find a flight to Changsha 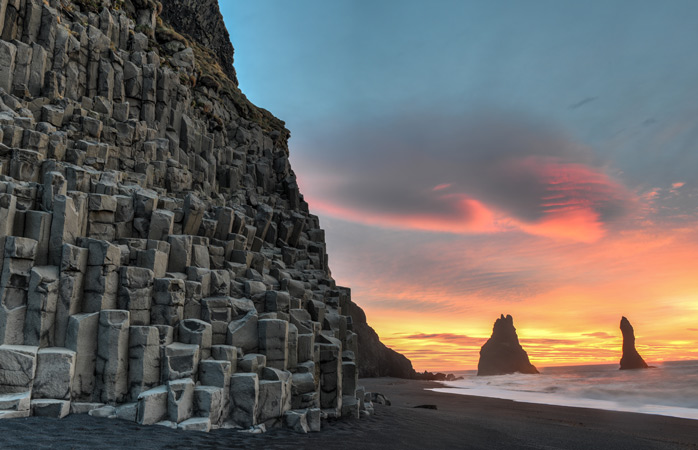 The black sand beach near the village of Vik in Iceland is not only a beautiful natural spectacle, but also home to numerous species of birds, such as puffins, fulmar and black guillemot, all of which have nestled on the pebble beach. And for good reason: with its unique black color, lined with columns made of light basalt that nestle against the rock face, the beach exudes a very special atmosphere.

If you're looking for more icy adventures, check out our Icelandic road trip guide

Find a flight to Reykjavik

More articles for you