What is the best user onboarding software

Successful user onboarding: This is how it works between user and software

Around 77% (!) Of users drop out just a few days after installing mobile apps. The proportion should be even higher for desktop applications. What's wrong?

Often times, the spark just doesn't jump over. The user tries out the software, looks around, clicks here and there - and only leaves it a short time later. The reason: He had expected more and did not immediately recognize the added value.

You can think of the SaaS market as a never-ending season from the Bachelor's. The user has the choice between a large number of software products that vie for his attention. The goal is not just to make a good first impression, but to win over the user anew with every interaction.

Why do we, of all people, report on the topic? At Userlane, we support SaaS companies in introducing users to their software products as easily as possible. In doing so, we learned which methods have become established in practice and which errors are widespread. In this article we present some of our learnings.

Too often, onboarding is neglected

When working with numerous SaaS providers, we found that onboarding is being neglected. The product team is often too busy planning new features. The onboarding process, on the other hand, slides further and further down the list of priorities.

Because even the best software has no added value if the users jump off immediately and no relationship is established. Successful user onboarding ensures that new users fall in love with your software.

User onboarding: what is that anyway?

Every product requires a certain amount of effort from the user in order to work successfully with it. User onboarding describes the whole path from “I'll try it out” to “this software solves my problems”.

Different methods have proven themselves to introduce users to new software. This includes, for example, welcome slides or interactive product tours.

Regardless of the method, the following applies: No user is interested in the functions, but only in the added value that they gain with the product! The users don't want to learn anything about software. You want to use them - as comfortably and intuitively as possible.

No user is interested in the functions, but only in the added value that they gain with the product!

Every product is different - different rules apply to a game app than to an online banking platform. Therefore there can be no tips that are always and everywhere valid. The following best practices are only intended as food for thought for a better onboarding experience:

The first contact between the user and the software is often anything but romantic. Before they can see the product, users first have to fill out a series of forms. Many people lose the desire to get to know each other better at this stage.

UXmovement collected the most common reasons for form frustration:

As useful as they are, nobody likes registration forms! They're the annoying part of onboarding that everyone wants to get over with asap. This is why it is so difficult to make a positive impression on this step.

But some companies have made it: LinkedIn relies on absolute minimalism for the registration forms. The simple, clear design is easy on the eye of the user: Here frills such as frames, shadows and an excess of colors are deliberately avoided. The form is kept short and asks only the bare essentials from the user. So the form phobia doesn't even arise. 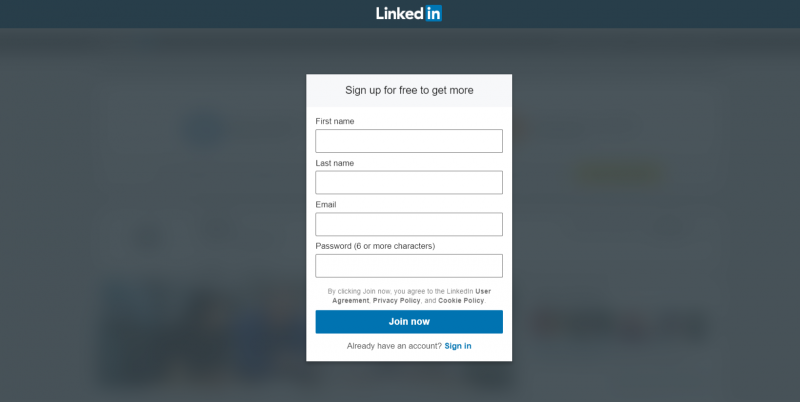 LinkedIn shows and only demands the bare essentials.

You know your product best and know exactly where to go. So don't leave anything to chance on your first date with the user. Pick him up at the time of registration and give him a clear direction, because

Overthinking kills motivation. The longer the user ponders, the more doubts arise. And the sooner it comes to a standstill. Too much choice can be paralyzing - especially when exploring an unfamiliar area!

Your job is to get the user out of thinking and into action. It is therefore important to relieve him of as many decisions as possible that are not absolutely necessary.

The question and answer portal Quora avoids information overload with a simple trick: all elements that are not relevant for the respective task are hidden. A single button is highlighted for each step. In this way, users are not distracted and only focus on one thing at a time. 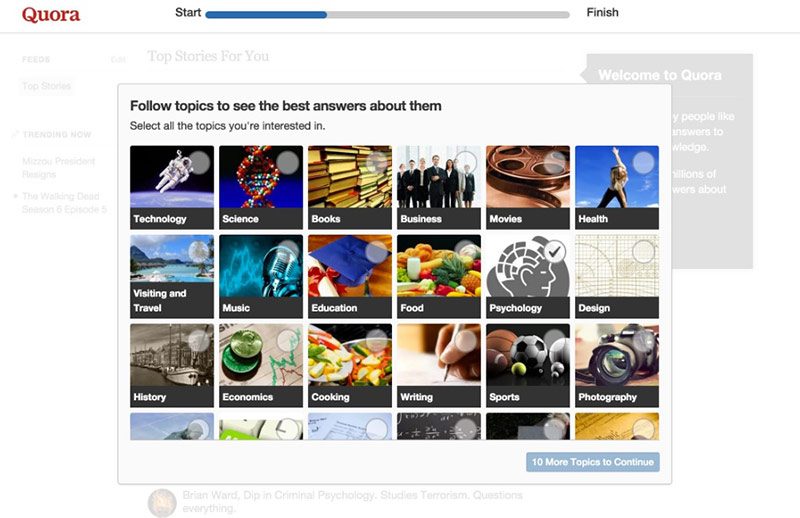 Quora always focuses the user on the current step.

3. Offer and celebrate a sense of achievement

Successful experiences release the happiness hormone dopamine and can reinforce the desired user behavior. A smart move is therefore to map tasks as simple as possible in the very first steps. Ideally, those with which it is impossible to fail. The quick sense of achievement motivates users to keep going.

Over time, the body develops a tolerance to dopamine and the release of the happiness hormone gradually decreases. It is therefore important to gradually increase the difficulty of the tasks. Just like a video game where the difficulty increases with each level. In this way, challenges retain their appeal and the user can follow their own progress.

If the user has mastered a task, the success must be visible and celebrated! How to create incentives and visualize successes, shows Duolingo. The language learning app uses gamification elements such as progress indicators and pop-up messages to give the user a virtual pat on the back.

Before registering, the user is asked to set a daily learning goal. Then the first lesson starts straight away (without the annoying registration forms that you would expect at the point - a clear plus point). 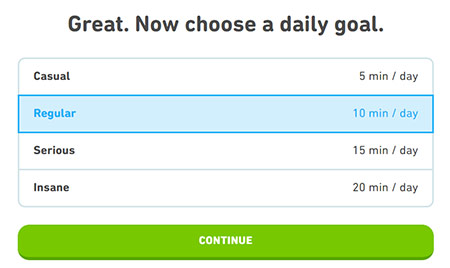 The user clicks through a series of simple multiple-choice tasks, with which, even as a newcomer, you can't go wrong. Quick successes are inevitable here.

With every answer, the user receives real-time feedback. A progress bar shows how many tasks are still ahead of him. In this way, the user always has an overview.

At Duolingo there are progress indicators not only for individual lessons, but also for so-called “streaks” - the number of days in a row in which the user has achieved his daily goal. The longer the streak, the more points there are as a reward. The points can be exchanged for numerous in-app bonuses. Duolingo motivates the user to spend time with the app every day. And creates good conditions for a long-term relationship. 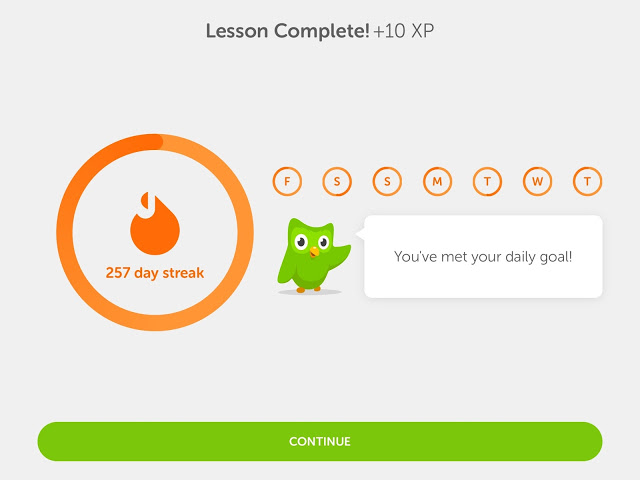 Especially with the first steps, the user is dependent on your support. Preferably not just in the form of explanatory texts, but from a friendly contact person.

Hence our tip: Give your onboarding a face! From birth, people develop a visual preference for faces and pay more attention to them than to other images.

The nose, mouth - and especially the eyes - are key stimuli that we recognize even where there are none. Fun fact: More than 660,000 people follow the “Faces in Things” page on Twitter. There are pictures of angry taps or bellicose potatoes.

Thanks to eye-tracking studies, we also know that people unconsciously follow the direction in which faces are looking. When we see a face, we automatically look in the same direction.

Faces are therefore ideally suited to arouse sympathy and trust.

The FrontApp messaging platform also applies this principle: Photos of real employees are used as avatars in the support chat. Such pictures look more authentic than polished stock photos. They remind users that they are dealing with real people instead of students at Stock Photo University. 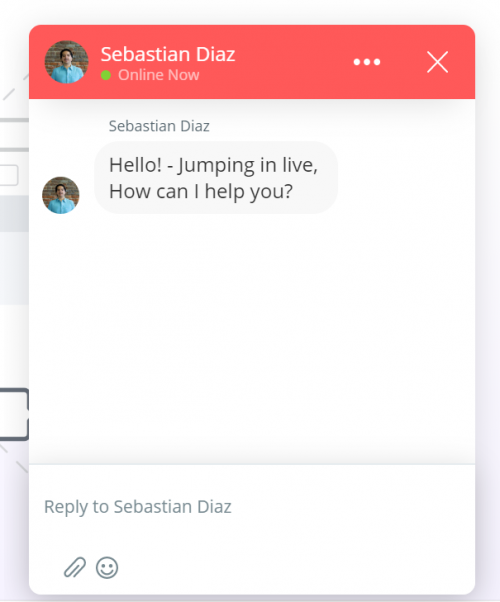 Frontapp gives the user the feeling of talking to a real person.

An example: the end of a test phase. The user has largely completed the onboarding. Wouldn't this be the ideal time to offer a trial to paid upgrade?

Before doing this, it should be clarified how actively the user has used the software. Because a very active and a rather inactive user are in completely different phases in the onboarding process. The active user could soon become a paying customer. The inactive still has to be convinced of the added value or needs some start-up help.

A sausage seller would never ask, "Would you like some fries with that?" Before the customer even reached the counter. The same principle also applies to onboarding emails.

For the less active user, the upgrade offer is annoying at best and daunting at worst. That is why personalized communication is absolutely worth the extra effort. Data on user behavior (e.g. key figures on login frequencies, feature adoption, etc.) help to divide your users into target groups in a meaningful way and to automatically send the corresponding emails.

But which user needs which information? These three questions will help you decide:

The test user doesn't know where to start? In this case, you can select the main functions of the application and introduce them briefly. Could he get a lot more out of your software? Give him tips on how to get the most out of the product. Has the user not yet had the opportunity to try out new features? Come to meet him and offer to extend the test period.

6. Offer all information in one place

Sometimes a user just can't get along with your software. What happens next? The onboarding will be interrupted. Tabs with video tutorials or help documents are opened. Stress and frustration arise.

The more often the user has to leave a software in order to search for a solution, the more likely he or she will jump off. It is therefore very important to support the users directly within the application if necessary. This approach is also known as performance support.

Although the term is not widely used, we all know examples from everyday life: There is the installation wizard, which supports the user step by step during setup. Or the option to get help via the in-app chat: 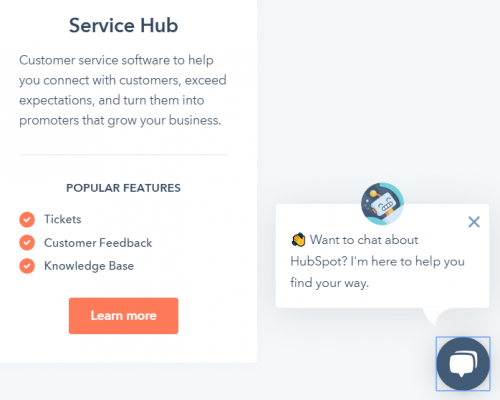 All information in one place including chat at Hubspot

Another example are small wizards embedded in software that are at the user's side at all times. With their help, users can get to know the software in detail without being torn from the onboarding process: 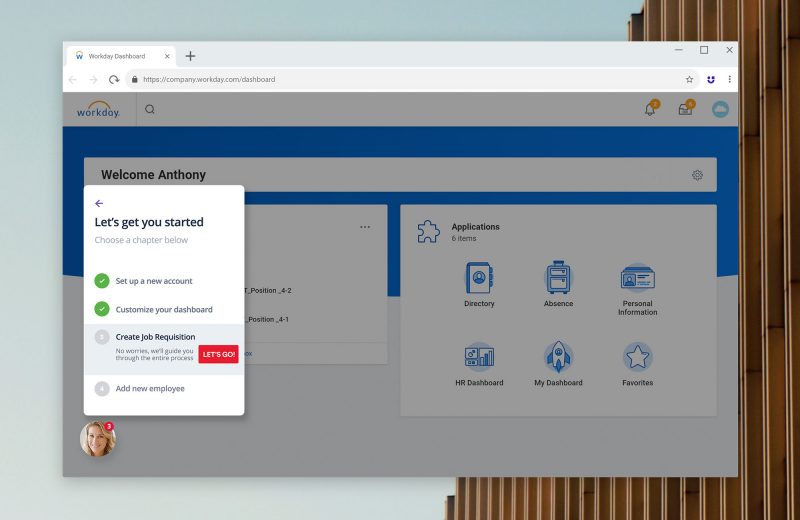 The examples show: A well thought-out onboarding process doesn't have to be rocket science. Even simple and seemingly mundane details can make the UX a lot more pleasant. Just as little attentions can make a big difference in a relationship.

Do you want to deepen the topic of user onboarding?

On Useronboard.com, UX Pope Samuel Hulick takes a close look at the onboarding process of well-known websites such as WordPress or Dropbox. He goes through and comments on every step from the user's point of view. The results are as educational as they are entertaining.

Another resource that we would like to recommend to you is this article from UXPlanet: It explains the basics and best practices around user onboarding in a concise and understandable manner.

Finally, we would be interested in how you deal with the topic. How do you guide users through your software? Which products convinced you through successful onboarding? And which left a negative aftertaste?