Is copper an example of metal 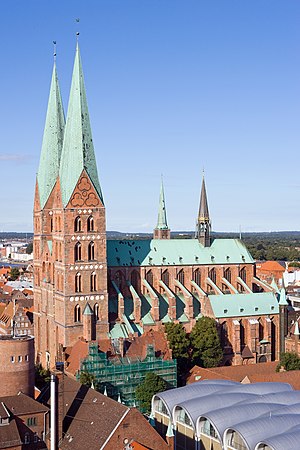 Churches and other old houses often have a roof made of copper, like the Marienkirche here in Lübeck. In the air, the red copper turns green over time.

Copper is a metal. It belongs to the group of heavy metals and is about ten times as heavy as the same amount of water. Freshly polished copper is salmon pink in color. If it's left in the air for some time, it turns into a dark red-brown. You know it from the one to five cent coins.

Copper is softer than iron. But it was discovered by humans much earlier and they used it to make their tools. Since the discovery of iron, there have been no tools made of copper any more.

People like to mix copper with other metals to make it stronger and more stable. A mixture of copper and tin is called bronze. Church bells or monuments, for example, are cast from it. Copper and zinc together make brass. In the past, this was used to make rulers and other instruments for measuring.

Where does copper come from?

In nature, copper is rarely found in its pure form, but mostly as ore that is extracted from the earth in mines. People have known copper since ancient times. The name "copper" comes from the island of Cyprus, where the ancient Greeks first found copper. Today, most of the copper comes from countries like Chile, Peru, the United States, Russia, and China. Only in tenth place comes a European country, namely Poland.

A lot of copper is recycled today. It can be melted down again from cables or water pipes. This creates a circular economy and the copper does not have to be taken from nature.

What is copper used for?

Copper conducts electricity particularly well. That is why all of our cables in the home and in vehicles are made of copper, as are the overhead lines of the railways or the power lines that run across the country.

Since copper does not rust, it is also used for domestic drinking water pipes. These tubes are usually about as thick as a finger. When the water flows through it, it takes on no taste. On the outside of the houses there are gutters and roof drains made of copper.

Copper can also be processed very well into sheet metal, i.e. into thin plates. In the past, many roofs of churches or domes were covered with it. A green patina develops on it over many decades. Nevertheless, the sheet metal remains tight.

However, copper has always been popular as a metal for coins. The four smallest euro coins are made of copper on the outside. In Switzerland it's the one and two-centime pieces. But they are no longer in use because they are of too little value.

What is the value of copper?

The value of a material depends, on the one hand, on how easy or complex it is to extract it. On the other hand, it also plays a big role how much of it is available and how many people want to buy it.

Before and during the Bronze Age, copper was so expensive that not everyone could afford their own tools. Since then the price has fallen, but has also risen again. In 2016, copper costs around 4-5 euros per kilogram. A few years earlier, however, it was more than twice as expensive. However, the price of copper also changes very significantly compared to the price of gold or silver.