Where do you want to act

From wanting to action: How to put your goals into practice

One has firmly resolved to do more sport; Still, you sit in front of the TV instead of jogging in the park. Why are we not putting this and other important goals into practice? And what can you do to better achieve your goals? In this article, we'll discuss three barriers to achieving your goal and introduce a simple, well-researched motivational gimmick to overcome them. We show how you can achieve your goals in everyday life.

From wanting to action: How to put your goals into practice

Again I sit on the sofa in the evening and my running shoes are in the corner. Instead of walking in the park, the television is on. I had decided so much to do more sport. At the weekend I'm out with my clique. Again I drink with every round and it goes until late at night. I wanted to take it easy and go to bed early in order to be fit for an excursion the next morning. On Monday morning we will discuss the offers for our next project as a team. Again, those shortlisted are those that look best the first time you look over it. We had firmly resolved to take a close look at all the offers with all of our knowledge. Why is it so difficult to get up from the sofa, stop drinking the last round and make an informed decision about the next project as a team?

The gap between set goals and shown behavior

“You just have to really want this, then you can do it!” Is well-intentioned grandmother's advice. But is that true? A number of studies have examined whether trying to achieve a goal more effectively actually leads to more targeted action. In these studies, a certain goal (e.g. eating healthier) was made particularly palatable to some participants (e.g. through a reward for healthy eating). Other participants were only asked to set this goal as their goal (for example, they received no reward). Then the level of agreement with statements such as “It is important to me to achieve this goal” was used to measure how important the goal was to the participants; the will (further literature on the subject can be found under the keywords goal setting and commitment). Most recently, actual behavior was measured in these studies; the action (for example how healthy the participants ate). In this way, the influence of willing on action could be determined. A statistical summary of all these studies shows that the interventions (for example the reward) lead to a medium to large increase in willing, but only to a small to medium change in behavior (Webb & Sheeran, 2006; see also In-Mind article by Lau, 2014).

Systematic psychological research is thus consistent with everyday observation: Often people do not achieve their goals. Willing alone is not enough to put your goals into practice. You stay on the sofa instead of doing sport, you order the next round instead of going home and decisions in the team are made after the first impression and without conscientious examination of all information. The reason for this are obstacles on the way to achieving the goal. When it is uncomfortable to act, reasons are quickly found that speak against it. In the clique, you just go with the flow and do what everyone else does. Or the routine in the team leads to a quick decision before one has really talked about the content. So there is a gap between setting strong goals and their actual implementation, between wanting and acting. But how can you overcome these obstacles and close the gap between wanting and acting?

From wanting to action: the role of if-then plans in achieving goals

In order to move from wanting to action, it helps to make additional if-then plans (Gollwitzer, 1999; further literature on the subject can be found under the term Implementation Intentions). Instead of just resolving to do more sport, I also come up with the plan "If I open the door to the apartment on Friday evening, I will immediately put on my running shoes and go for a run." When I have made such a plan, I immediately recognize the favorable situation (Friday evening at the apartment door) and the if-then link triggers the planned reaction (put on running shoes and run). The favorable situation literally jumps into me and I don't have to look for it anymore. As soon as the situation arises, I act immediately without brooding. So I'm out the door before landing on the sofa out of comfort.

If-then plans have very similar advantages to habits (more on habits in the in-mind article by Thurn & Schlicht, 2012). If you do something the same way over and over again, you don't have to think about it anymore and the behavior program runs automatically. A good example is the daily commute: I no longer have to think about whether to turn left or right at the traffic lights, but immediately take the right turn. The main difference between if-then plans and habits is how they arise: People build habits through practice, that is, by showing behavior in the same way over and over again. In order to make if-then plans, however, people think about when, where and how they want to act in order to achieve their goal. Even after this one step, if-then plans immediately show their intended effect on the person's behavior.

Indeed, neuropsychological studies show that newly formulated if-then plans use brain areas similar to long-established habits and even influence very early processes (overview by Wieber, Thürmer, & Gollwitzer, 2015). In fact, the effect of if-then plans is observed in the brain about half a second after the situation has occurred. This means that behavior control through goals with if-then plans is faster and more efficient than that with mere goals. But what use is this efficient and fast action control through if-then plans to achieve goals in everyday life? We will now discuss this question using the three examples presented at the beginning.

Many people resolve to exercise more. Nevertheless, the implementation often fails because of its own convenience. After work, you could certainly go jogging for another 20 minutes, but you feel too tired or don't feel like it and before you know it you're sitting on the sofa in front of the TV. This everyday experience coincides with psychological research, which shows that around a third of people who aim to move more remain inactive (Godin & Conner, 2008). So you fail with your goal of being active, because initiating action (starting) is uncomfortable. 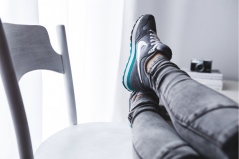 Girl resting with legs on a white chair by Kaboompics // Karolina via Pexels (https://www.pexels.com/photo/girl-resting-with-legs-on-a-white-chair-6344/), CCO ( https://creativecommons.org/publicdomain/zero/1.0/deed.de

If-then plans help to get started, because you have preprogrammed yourself and thus act without brooding. The previously established plan “If I unlock the door to the apartment on Friday evening, then I immediately put on my running shoes and go for a run.” Prevents getting out. Before I land on the couch, I already have my running shoes on and do my lap in the park. In fact, a large number of studies have shown that if-then plans lead to more physical activity (Bélanger-Gravel, Godin & Amireault, 2013), especially among participants who wanted to do more exercise. So it is not enough to set out to do more sport. In order to overcome your own laziness, you also have to plan when, where and how you will achieve this goal.

Even if you can achieve a goal on your own, social influences can thwart your plans. People in the clique, family, and quorum influence how one behaves. The situation in the pub mentioned at the beginning is a good example of this: Actually, you have resolved not to drink so much because you want to get out early the next morning; but if the others order the next round late in the evening, you still can't get out of the way. This is one of the factors that make it difficult to reduce alcohol consumption.

Young adults tend to drink in groups, and these groups have a strong influence on how much people drink. Martin Hagger and his team (2012) investigated whether providing goals with if-then plans can reduce alcohol consumption in young adults. They asked young adults from Finland, Estonia and Great Britain about their current alcohol consumption, explained the consequences of excessive alcohol consumption and asked them to make a firm commitment to drink only in moderation and within the safe limits. Some of the participants guided them to come up with an if-then plan with an alternative reaction for their individual typical drinking situations. For example, such a plan could be: "If the others order another round of beer, I will ask for a Coke instead." 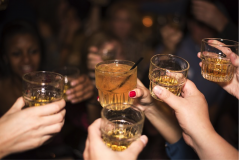 Image from kaicho20 via Pixabays (https://pixabay.com/de/alkohol-whisky-trinken-feier-492871/), CCO (https://creativecommons.org/publicdomain/zero/1.0/deed.de one month later drank Participants with if-then plans actually used less alcohol than participants who had not additionally underpinned the implementation of their goal with a plan. Interestingly, the effect of if-then plans was strongest in Estonia and Great Britain, where excessive alcohol consumption is particularly common. In Finland, where participants had little drank at the start of the study and reported having much control over their drinking behavior, if-then plans did not further reduce consumption, which is consistent with research on if-then plans especially have positive effects when the set goals are difficult to achieve (Gollwitzer & Sheeran, 2006) So if-then plans also help to achieve the goal of drinking less despite social pressure reach.