Can you get tapeworms from your dog

Protect your dog and yourself from worms! 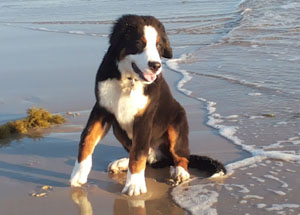 The most common types of worms in dogs are roundworms, but hookworms and tapeworms also occur. Young animals are particularly affected.

How do worms harm an animal?

Worms live in the intestines and feed on their host's blood, food, or tissue. In this way they deprive it of important nutrients. Puppies in particular therefore show developmental disorders, shaggy fur, emaciation or clouded eyes. Since roundworms live in the intestines, the little ones vomit frequently and sometimes even have bloody diarrhea, which can quickly become life-threatening. If the hookworm infestation is severe, massive anemia (anemia) develops, which can lead to the premature death of the animal.

How do dogs get infected?

Depending on the type of worm, puppies are infected in the womb. Roundworms and hookworms also get into the stomach and intestines of the little ones as larvae via breast milk. Since the eggs of adult worms are released in the intestine and get outside with the faeces, they also become infected again and again when they sniff at the faeces and in the process ingest worm eggs with infectious larvae. Even for adult dogs, every single “pile” can be a constant source of renewed infection. Since even older animals do not always have enough defenses to prevent larval development, they can again excrete worm eggs after renewed infection and thus become a new source of infection. But worm eggs can also be carried into the apartments with the shoes on.

Dogs become infected with the fox tapeworm by eating wild rodents that carry tapeworm stages within them. The dog tapeworm, on the other hand, can be transmitted if dogs with insufficiently heated or frozen meat (especially offal such as lungs or liver), e.g. B. the so-called "Barfen", be fed.

Can I get infected from my animal?

Some species of worms can pass from dogs to humans and cause serious symptoms of illness, with children being particularly at risk.

In the course of their development into adult worms, roundworm larvae first migrate through the animal's body, are then coughed up from the lungs into the mouth and swallowed again. If, while cuddling with the animal, humans ingest the larvae directly or via worm eggs, which an animal excretes with the faeces or carries in its fur, worm larvae can migrate into human tissue and organs. As a result, nerve tracts, eyes or the brain are sometimes damaged. Hookworm larvae, on the other hand, actively dig into human skin and cause painful inflammation.

If a person becomes infected with the dog or fox tapeworm, dangerous cysts can form in the liver or other organs. Despite complex treatment, an infestation with the fox tapeworm can lead to death.

It is all the more important, in consultation with the veterinary practice, to protect dogs safely from an infestation with worms and thus largely to prevent them from repeatedly shedding contagious worm eggs.

How do you diagnose worm infestation?

As a rule, the poor general condition is in the foreground. In addition, very young puppies excrete roundworms in the faeces as a spaghetti-like ball or they vomit them. Older animals, on the other hand, decompose dead worms in the intestine, so that detection is usually only possible via the microscopic eggs of the parasites. For targeted treatment, the regular veterinary examination of a faecal sample collected over three days provides information about the existing worm species. Tapeworms, on the other hand, with which dogs can become infected through flea infestation or by eating mice, give off their end links filled with egg packets. Only these can then be seen with the naked eye as rice grain-like structures in the excrement.

How are worms controlled?

Depending on the type of worm, weight and age of the animal, various drugs, some of which require a prescription, are used. Your practice team will give you expert advice on how to administer them.

“Home recipes” such as vegetables or garlic are by no means effective against worms!

If worm infestation has been found, it must be treated several times in order to eliminate the parasites. The breaks between treatments depend on the type of worm and the severity of the infestation. In puppies, the first deworming should be carried out as early as the second week of life. In the event of an infestation with roundworms, hookworms and tapeworms, combined deworming can be carried out.

How can I protect my animal and myself?

To protect against worms, the risk of infection for your animal must be assessed by the veterinary practice. Based on this, the type and frequency of the protective measures is determined individually. The following applies:

Consider it: Worms can be an acute threat to your puppy's life. Even adult dogs remain at risk of infection for a lifetime. Only regular deworming with suitable medication from your veterinary practice will protect the health of your four-legged friend and also protect you and your family from infection.