Why are the French good at math

In France there is a school grade scale from 0 to 20 points:

The grading system in France: 20 the highest and 0 the lowest

The limit for passing is usually 10 points, even for exams. So for many students 10 is the magical limit. "Tu as la moyenne?" (literally: "Are you on average?", say: have you passed? is a common question, as well as "Ouf, j'ai la moyenne!" (Fortunately, I'm on average, read: I passed!).

The grading system in France and the equivalent in Germany

Grades between 12 and 13 are considered "pretty good". 15 is already described as good, 16 and 17 as “very good”. You rarely get grades 19 and 20. But it also depends very much on the teacher or the subject. So you can get 20 out of 20 points in math or physics if all the tasks are correct. But for an essay in German or history or for a drawing in BK lessons, the grade 16 or 17 is often given if a work is very good. There are practically never 20.
At grammar school (10th to 12th grade), i.e. in the last grades before the Abitur, grades 18 and 19 on school reports are extremely rare. At the Baccalauréat (the French Abitur) you not only get a "very good" grade 18 and above, but also the congratulations of the jury. These awards often play a big role in applications and résumés!

Students in France receive three certificates a year. The grade at the end of the certificate relates to the class work. Oral participation usually does not count, so it is important to write good classwork. 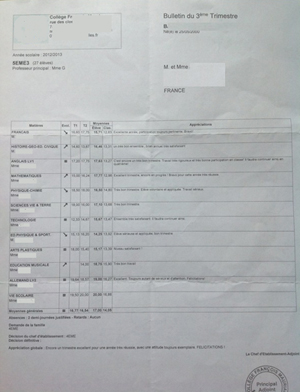 There is a class conference at the end of the school year. The teachers and class representatives discuss all students together to decide who will be transferred or who will remain seated.

<- Here you can see what a French certificate looks like: click on the picture to enlarge it.