What are reviews of ASAT guitars

G&L upholds the legacy of Leo Fender. The new Fullerton Deluxe ASAT guitars from US production represent the current standard of the basic, simply functional board guitar in the sense and with final contributions of their inventor.

Press text: "The G&L ASAT Classic is Leo’s final word on the traditional single-cutaway- bolt-on-ax." In fact, Leo Fender founded his last company G&L (George and Leo) together with George Fullerton and Dale Hyatt in 1981 and settled on Fender Avenue in Fullerton, where he continued to tinker with pickups, vibrato functions and other technical details until his death in 1991 . 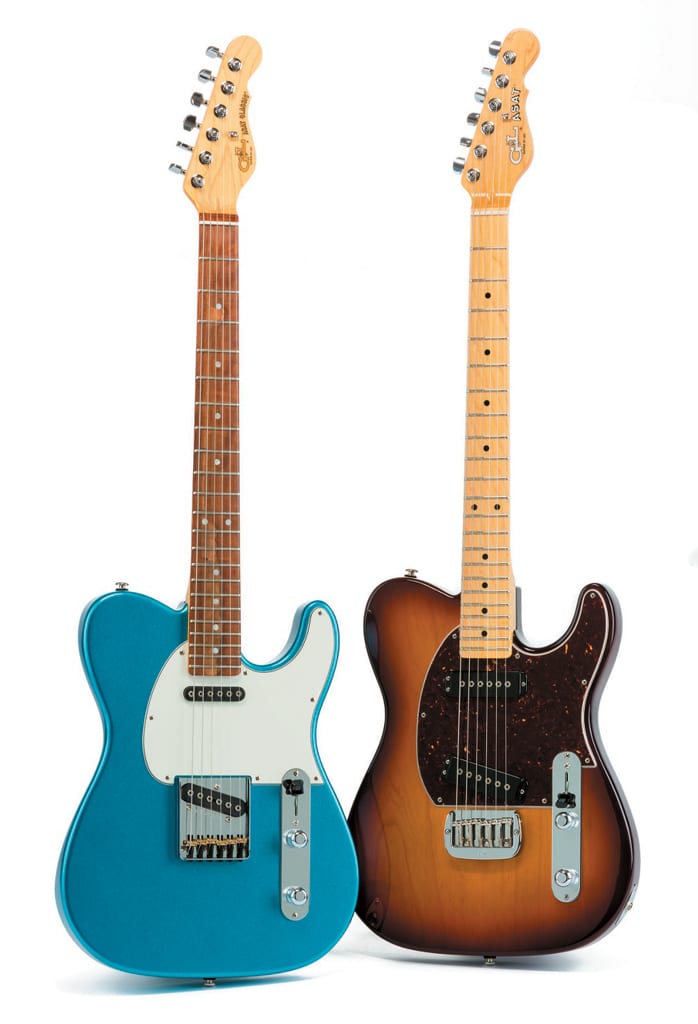 The design of an electric guitar can hardly be more traditional and fundamental and yet the Telecaster or one of its numerous variations is still the instrument of choice for many players. The present Fullerton Deluxe ASAT versions belong to the category of classically based models with contemporary updates through improvements in detail. With basically identical construction, our test subjects differ in the choice of wood for the body and fingerboard, but also in their bridges and electrical components.

The Fullerton Deluxe ASAT Classic, painted in Lake Placid Blue Metallic, comes with a body made of alder, which, unlike the original Telecaster, has a system contour on the bottom. The glossy lacquered neck with Modern Classic profile made of maple is inserted into the body in the well-known manner via a metal plate with four screws, the body area for the neck holder was left square.

Chechen, also known as Caribbean Rosewood, was used for the 9.5 ″ radius fingerboard. Despite its nickname, this wood does not belong to the Dalbergia family, so it is not rosewood and is not on the CITES list. An inexpensive replacement for the expensive tropical wood that is only available to a limited extent thanks to species protection.

22 neatly crafted medium jumbo frets (Jescar 57110) and dot inlays for marking positions can be found in the fingerboard. The headstock of typical G&L cut is equipped with encapsulated standard tuners, whose conical winding cylinders always lead the strings down to the foot. Nevertheless, the high E and B strings are additionally held down by a string tree to improve the pressure on the narrow bone saddle.

The G&L MFD ASAT Classic single-coil pickups without caps, designed by Leo Fender himself, show the classic Telecaster configuration with a neck pickup placed in the white pickguard at the front and the bridge pickup screwed onto the traditional boxed steel bridge with individual brass saddles (brass). The switching and control mimics of the ASAT Classic with a 3-way toggle placed on a metal plate and general volume and tone controls placed behind it are just as clear as they are tried and tested.

The body of the Fullerton Deluxe ASAT Special lacquered in tobacco sunburst consists of swamp ash (alternatively also alder) and of course also has a contour cut on the bottom for comfortable installation. Screwed maple neck with "Modern Classic" profile as before, but here with a maple fingerboard (9.5 ″ radius) - Chechen is also available. Otherwise comparable equipment with 22 medium jumbo frets, but of course black dot inlays in the light fingerboard. As with the Classic, we find the bone saddle and G&L sealed back mechanisms.

In contrast, however, the rather massive G&L Saddle-Lock Bridge with chrome-plated, individually adjustable saddles made of brass and pleasantly smooth surfaces. The bridge, which was designed by Leo Fender himself, also stands alone on the Special and is not combined with the bridge pickup.

The built-in G&L Jumbo MFD single coil pickups with their black plastic caps are also original designs by Leo Fender and they are still wrapped in Fullerton today. They are placed in the tortoise-colored pickguard, adjustable in height using three small Phillips-head screws.

Both Fullerton versions naturally have the Fender-typical 648 mm scale length and access to the truss rod from the head. The instruments made in the USA are delivered in black deluxe Tolex guitar cases, which are accompanied by certificates.

The Fullerton sister instruments are easily portable at 3.6 kg (Classic) and 3.4 kg (Special). System, alignment and handle bed supervision are also in the green and the somewhat old-fashioned chunky neck-body transition is booked under the term tradition. Apart from that, both guitars play excellently with their grippy "Modern Classic" profiles, premium frets perfectly balanced using the high-precision PLEK method and softly rounded fingerboard edges.

The neck of the Special (42.4 mm) is a little less wide than that of the Classic (43.0 mm). The latter also has the slightly higher string action. A matter of taste, or to paraphrase Jeff Beck, who likes the fighting posture and absolutely no strings that are set too low: "I don't want a woman who lies down on her back straight away."

Otherwise, the feel of the guitars is comparable thanks to their softly rounded neck profiles. Both instruments also have a long and even swing and let you hear perfectly weighted voices in the basic chords. Thanks to different tonewoods and probably also because of the different bridges: the Classic has a little more earth in the tone; the special sounds drier and more silky in resolution. In any case, both have absolutely serious acoustic sound capabilities.

"All theory is gray, the decisive factor is on the pitch" (thanks Adi), um, the truth that applies to us is of course revealed by the amplifier in this matter:

The Fullerton Deluxe ASAT Classic model proves to be the more traditional sounding instrument in terms of electricity. In a nutshell: It simply delivers tele-sounds in their purest form. Well-contoured and with a respectable depth in the general representation, this is first demonstrated by the neck pickup. Chords do not lack plastic resolution with precise string separation, lines come to the ear crisp and with a slightly glassy expression. Traditional tele-sounds are just right through and through, and that in the best sense of the still current, evergreen sound discovery. This impression is only confirmed by the interconnected pickups. The middle switching position delivers crisp jingle jangle at its finest, fresh and open.

If we switch to the bridge pickup, we are in no way surprised by the tight, now sharply pointed sound. He emphatically represents what we mean by the term twang. Wiry and dry in the honking bass, aggressively snappy in the highs. With settings from clean to crunch, this can be easily incorporated into sounds from country to pop. With a steaming amp it's no problem to pull out the scalpel to play the musical Freddy Krueger in cold blood. This rapidly cutting sharpness can also be intercepted in fine gradations with the tone control, which gives the lead sound, which is still present, a little more mid-boost.

The Fullerton Deluxe ASAT Special comes with a wide-open, bony-dry sound, but still transports this silky fine structure of the acoustic system. Body made of swamp ash and maple neck with maple fingerboard together ensure a fast attack behavior. The sound literally jumps off the fingerboard. Clean sounds inspire with a wonderfully transparent representation of precise and harmoniously resolved chords with great string separation. Of course, spicy tips slip out of the bridge pickup, but that's less jarringly angular than aggressively offensive. The combination sound of the two single coils is also great. As clear as a bell and pearly silver, the glassy chords roll off.

In overdrive, the Fullerton Special proves to be a remarkably assertive instrument, primarily because of the very vividly articulating highs. Even in gain mode, they still show laudable harmonic entanglement even at small intervals. In any case, it is very easy to work with the slightly rubbing interference. The neck pickup highlights power chords and lines played on the bass strings with pointed contours, pleasant percussion and woody, dry gestures. The mids, which are not too dominant, sound balanced and round, leaving room for the highs that blend harmoniously into the sound. Above that, catchy lead sounds of some elegance are easy to get.

With a change to the bridge pickup, a lot more bite comes into play. The outline is crystal clear, notes struck on the lower strings spring off as fast as an arrow, knocking out a bony, aggressive twang. It is set up a little differently than the Classic, which offers a strongly focused snap with a pointed nose, not least due to the large T-style bridge. With the Special, too, everything feels super-electric, which of course is also due to the sizzling background noises in higher operating modes. In this point, however, especially as far as the bridge pickup is concerned, it is surpassed by the Classic - they are just single coils. Even if it is annoying now and then, we know that good music could never prevent it. Below this extreme application, however, there are a lot of application points from surf to country to punk, where these gripping twangy sounds are just right. 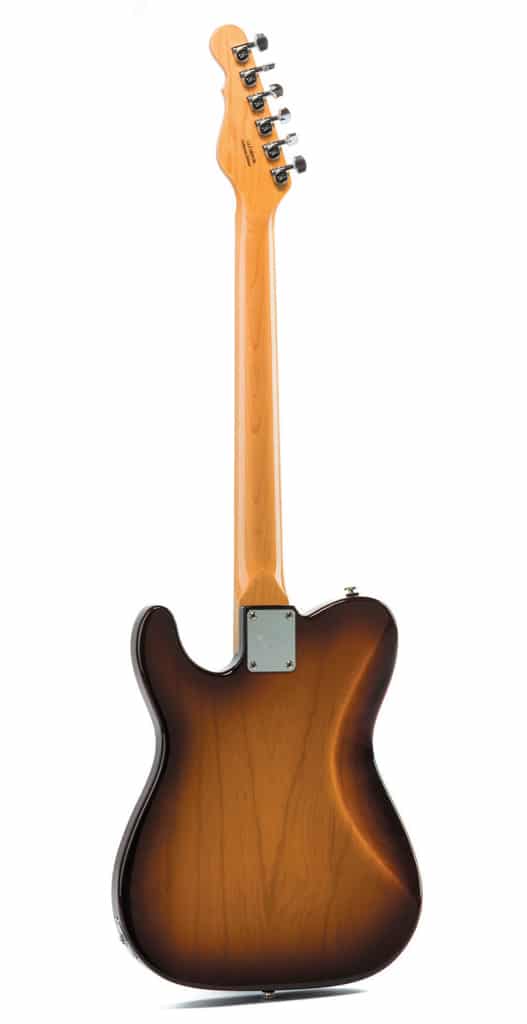 With the model versions Fullerton Deluxe ASAT Classic and Special from US production, the manufacturer G&L is cementing its claim to the legacy of Leo Fender in the sense of the famous and unmistakable Californian trademark sound. It's nice, however, that you don't just float around on well-deserved laurels, but rather update the tried and tested designs structurally and based on modern production methods. Both model versions have contact contours on the bottom, hand-friendly smooth bridges with individual saddles and well-profiled necks with perfectly balanced frets (PLEK).

The guitars are electrically potent, offer powerful sound images, each with its own accent, which is only clearly audible due to the related tonal color. Spoiled for choice? Well, how it all feels to you personally, what hand and ear whisper to you, is still crucial. In terms of the practical playing equipment and the sound capabilities, both Fullerton Deluxe ASATs can claim top positions in the electrical pecking order! 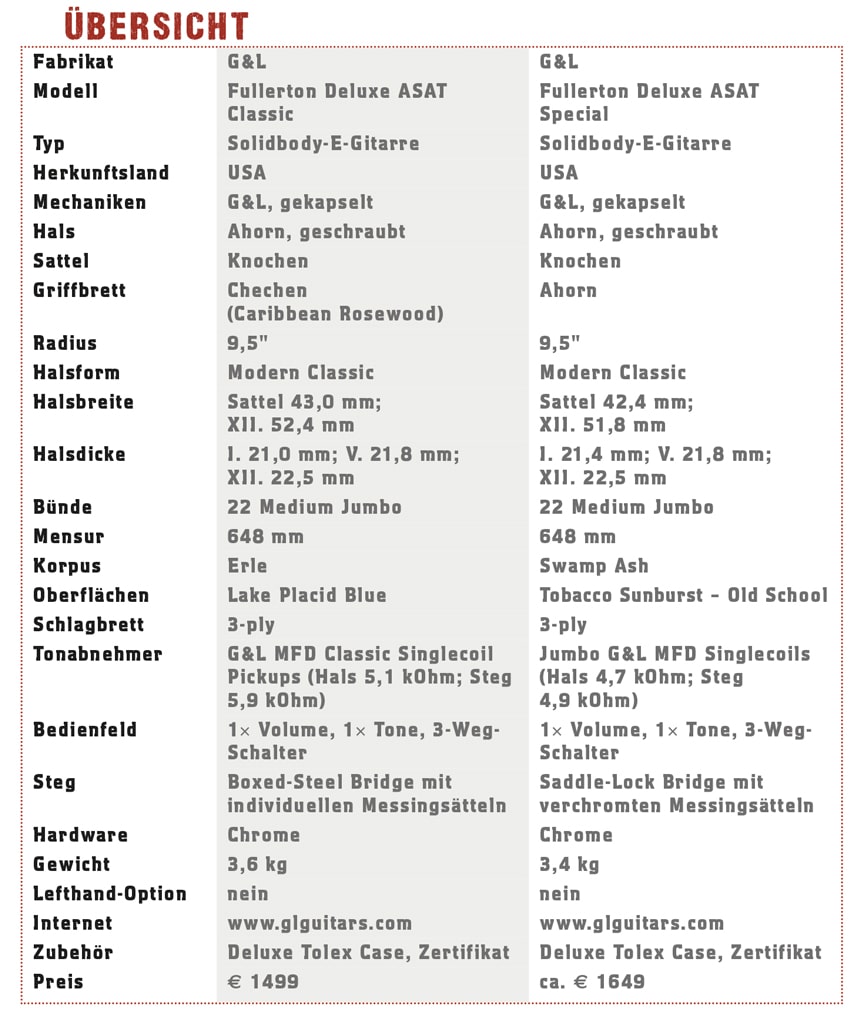