What were a blacksmith's tools

The blacksmith shapes the hot iron with a heavy hammer on his anvil.

The blacksmith is a craftsman who works metal. His profession has existed since the discovery of metals. In the beginning, a blacksmith made many things that people needed: tools, nails, horseshoes, bars, chains, but also jewelry and much more. In the course of time this has evolved into the various professions of metalworker. A metal worker can, for example, build window frames, stairs or play equipment out of metal.

Anyone who wants to become a blacksmith today can learn this profession through an apprenticeship. Strictly speaking, the profession is now called “metal worker, specializing in metal design”. The training takes place in a company. On a few days, the apprentice also visits a vocational school.

Today there are far fewer blacksmiths, because in the past you needed things made of metal, which today are often made of plastic or other materials. Many of these professionals prefer to call themselves a blacksmith. Today you make things that you don't really need. They make signs or artistic gates and other things that should be particularly beautiful. These blacksmiths still work largely like the village blacksmith from old times.

The farrier is a special blacksmith. He makes "shoes" for horses: these are the horseshoes. In the years after 1950, most horses were replaced by cars, so there is less need for such farriers today. But they are still important in equestrian sports today.

How does a blacksmith work? 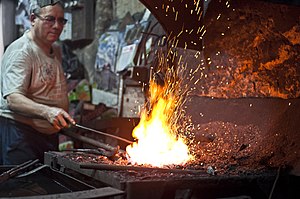 At the beginning of his work, the blacksmith has to put the iron in the forge until it glows.

The blacksmith shapes a raw metal into a finished item. He heats the raw metal, for example iron, until it glows. To do this, he puts it in a fire in which charcoal or coal burns. To generate the necessary heat, he fanned the fire with a bellows. The fireplace is called Esse.

The iron begins to glow dark red, then light red, sometimes it glows almost white. The blacksmith grabs it with pliers and places it on a large iron block, the anvil. Then the blacksmith beats the pig iron into the desired shape with strong blows of the hammer.

The blacksmith can tell by the color whether his iron is still hot enough. Otherwise he has to put it back in the forge and reheat it. He works like this until his work is finished, for example a candlestick. A particularly hardworking blacksmith has several irons in the fire. He processes these alternately and puts them back in the forge to be heated. So he doesn't have to wait.

How does the blacksmith make pig iron more stable?

The iron has to glow red or even yellow so that the blacksmith can work it.

At the beginning of the Iron Age, people mainly needed tools such as knives, hatchets, hammers, pliers and shovels. But weapons such as swords were also in great demand, as well as lance tips and arrowheads. The blacksmith could not simply make these from pig iron, because they would break. So he had to refine the pig iron first.

Pig iron is brittle because it contains a lot of impurities. These are remnants of stones, coal and other materials. The blacksmith knocks these out by repeatedly heating the iron and hammering on it. As a result, however, the piece of iron becomes longer and wider. The blacksmith then folds it up like cake batter that has been rolled out too much and starts all over again.

As a result of this work, the iron becomes more and more pure. The different layers also make it more stable. Such iron is called wrought iron. Sometimes the term forged steel is also used, but the blacksmith alone cannot produce the right steel. To do this, you need a factory with a blast furnace.

Does a blacksmith work all alone? 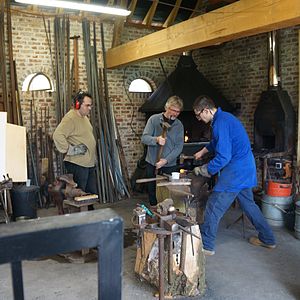 This blacksmith in an open-air museum works with his assistant.

If it's just a knife or a candlestick, the blacksmith can do it all by himself with the hammer. For wrought iron, however, he needs an assistant. The blacksmith himself takes a hammer that is as heavy as possible. The assistant uses an even heavier hammer with a long handle. He's holding it in both hands. In Germany it is called "sledge hammer", in Switzerland also "Schlegel".

With this, blacksmith and assistant take turns hitting the iron. The blacksmith gives the direction: he turns the iron with the pliers and hits it with the hammer. But it is often so loud in a forge that the two cannot communicate with each other by shouting. That is why there is a kind of blacksmithing language: When the blacksmith hits the anvil with the hammer, it means: I'll turn the iron over after your next blow. If he hits the anvil several times so that it goes like this "trrrrr", that means: after your next blow it is over. There are more such signs.

Were there forging machines before?

This red-hot iron is pushed into a machine with a steam hammer. The steam engine ensures that the huge hammer hits the metal with great force.

The blacksmith needed a lot of physical strength. That is why people invented forging machines as early as the Middle Ages. These worked with hydropower. It's like a seesaw as it stands on the playground.

One side is a huge hammer. It can be as heavy as two men and it hits the anvil. A water wheel is turning on the other side. It has something like an arm that pushes the seesaw down with every turn. If the arm then rotates further and slips off the seesaw, the hammer hits the anvil on the other side. The blacksmith can simply hold his hot iron between the hammer and anvil and turn or move it until he has to heat it up again.

Such a forge was called a hammer forge. They still exist today. But they are only used because of the spectators, mostly in an open-air museum. They show how in the past human strength was supported by clever technology.

In the 19th century, the first forging hammers were operated with steam engines, later with electric motors. The steelworks developed from this. Steel is still largely made of iron, but it is harder, more flexible or more resilient, depending on the situation. Additions also make the steel rust-free.

What happened to the old blacksmith's trade? 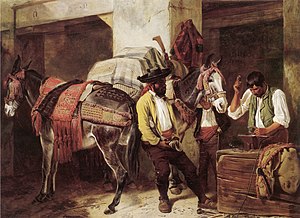 A painting from over 150 years ago: In a forge where horses get their horseshoes.

Even after 1950 there was the village blacksmith who did all kinds of repairs and made tools such as pliers and shovels. Even earlier, however, there were blacksmiths who concentrated on certain areas: the farrier, the nail smith, the cutler, the armourer, the chain smith, the art blacksmith and many others. The locksmith was actually a blacksmith too: he made locks with keys for churches, houses or chests.

With us, training to become a “metal worker, specializing in metal design” takes three to four years. The apprentice needs a good knowledge of mathematics and physics and he must be able to imagine what an object looks like in space. During training, he learns what tools are available and how to use them. He has to know how to read technical drawings, how to combine different materials and also how to deal with customers. He also learns how to work safely, because after all he has to do with fire and hot metal and he also has to protect his eyes and ears well.

Other blacksmiths concentrated on a certain material even earlier: the goldsmith made precious drinking vessels, plates or jewelry. The silversmith did the same. The coppersmith made pans as well as smaller and larger kettles. They hung over the fire in the kitchens or were used to make cheese from milk. Today there are separate training courses for all of these different subject areas.