How long is a day on Ganymede

Almost four centuries ago, on January 7, 1610, Galileo Galilei pointed a telescope at the
Jupiter and discovered three "stars" nearby. When he returned to Jupiter on January 8th
saw, he noticed that the "stars" were no longer in the same place as the day before, and he
concluded from this that they move around Jupiter, that is, moons are what can be seen through more
Confirmed observations on the following days. Thus one had not only discovered
that the earth is not the only planet with satellites, but also that the geo-
centric world system, in which all the stars revolve around the earth, refuted because the
newly discovered moons revolved around Jupiter. Galileo discovered it during his observations
also on January 11, 1610 another, fourth Jupiter moon, brighter than the other three.
That was Ganymede. These four moons are now known as the Galilean moons. 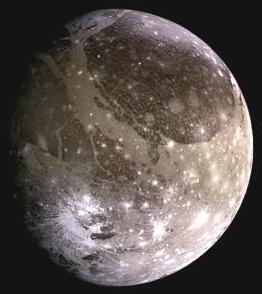 The Galilean moons are the only major moons of Jupiter and
move around it at a distance of approx. 6 to approx. 26 Jupiter radii. 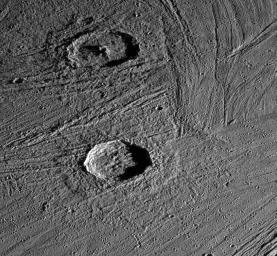 Like most of Jupiter's moons it was Ganymede, the only "male" moon of Jupiter,
named after one of Jupiter's many love affairs: Ganymed (in Greek Ganymédes,
therefore correctly stressed on the last syllable and pronounced "ganümeht") was the
"most beautiful of the mortal inhabitants of the earth", the one from Jupiter to Olympus because of its beauty
was kidnapped to be allowed to be Jupiter's cupbearer and pleasure boy. Third next
Galilean moon to Jupiter received Ganymede the name Jupiter III. 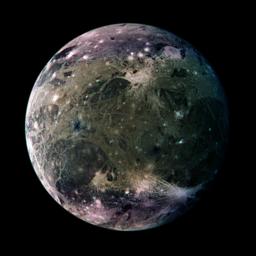 Ganymede is the largest moon in the solar system with a diameter of 5262 km and
also larger than the planet Mercury. Ganymede is likely to be structured as follows
(see sketch): Inside there is a core made of molten iron or iron and
Sulfur surrounded by an inner mantle of silicate rock; both layers
together are roughly the size of the Earth's moon. The adjoining outer
Coat is made of relatively warm, soft ice, and whole
outside there is a thin, cold, hard crust of ice. 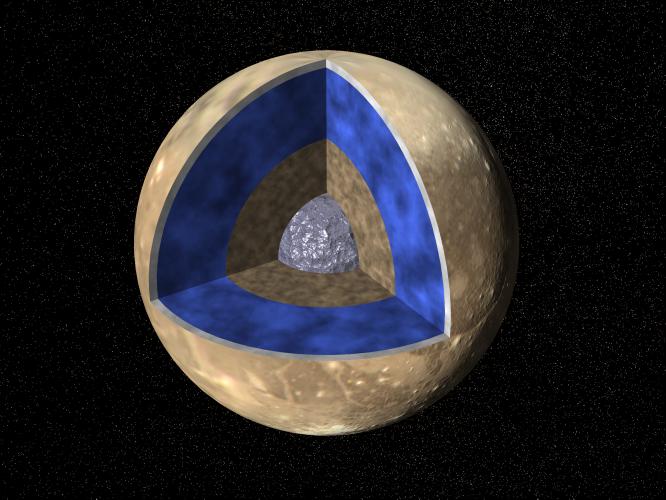 Ganymeds Surface consists of roughly equal parts of two different types of soil, one
very old and one a little younger. The old regions are 3 to 3½ billion old
Years and are darkly colored by a large number of craters. Most of the craters are
there already heavily weathered by the river in the ice crust, from some primeval craters
the contours have even disappeared except for a "shadow" (so-called palimpsest,
see picture). But there are also relatively young craters with bright ejection rays
made of ejected ice (see illustration), but these too are mostly flat
and have no ring mountains.


In the slightly younger but still old regions that appear brighter there are
there are also craters, although the old ones have disappeared, but
extended areas of ditches and ridges. These are a few hundred meters wide
and thousands of kilometers long and formed by tectonic shifts.