What services does alibaba com offer

The Chinese Alibaba Group describes itself as "the world's largest retail commerce company". The large e-commerce player from the Far East is also becoming increasingly well-known in Germany. But which services come together in the cosmos of the globally active group of companies? We present the most important marketplaces for digital trade as well as the integrated payment service Alipay and give an outlook on Alibaba's vision of seamless shopping.

This is part one of the three-part series "China's Giants - These Companies Are Conquering Global E-Commerce".

Almost $ 40 billion in annual sales and more than 600 million active customers: The Alibaba Group's latest 2018 figures are impressive. China's leading e-commerce group is one of the most valuable listed companies in the world - and in this country is often seen as the Chinese counterpart to Amazon. The Internet giant from the Middle Kingdom is much more than just a large trading platform.
The Alibaba Group brings together the businesses of around 210 subsidiaries that operate in the areas of e-commerce, Internet infrastructure and financial services and offer products and services worldwide. The founder Jack Ma, a former English teacher from the Chinese city of Hangzhou, has thus created his own ecosystem for digital trade over the past 20 years, in which capital and know-how remain bundled in one place and are networked. The widespread empire includes several online marketplaces for both end customers and companies, with hundreds of millions of users.

For German dealers who want to purchase goods directly from Chinese manufacturers, the English-language website Alibaba.com is one 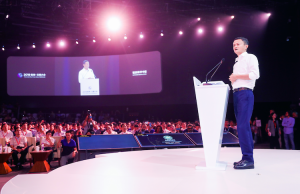 central point. The marketplace, founded in 1999, focuses on B2B trade and networks German companies with Chinese manufacturers. The range of goods is very extensive with categories from electronics to home and garden to beauty and care. In addition, Alibaba.com offers a variety of supply chain services, including customs clearance, trade finance and logistics services. The wholesale marketplace was the first division in the Alibaba cosmos. Based on this platform, Jack Ma came up with the company name of today's group of companies. Based on Alibaba and the 40 thieves from the oriental fairy tale collection Thousand and One Nights, the new website was intended to open the door to foreign markets and enable global online trading as with an "open sesame" effect. The wholesale marketplace also has a Chinese-language offshoot that has been renamed www.1688.com and also targets B2B business.

German companies have a direct line to online shoppers in China via the now huge Tmall marketplace. The trading platform is a popular e-commerce tool and, like the competing website JD.com, is suitable for market entry. Together with JD.com, Tmall already covered 85 percent of the entire Chinese e-commerce market in the fourth quarter of 2018. Especially on the so-called Singles Day on November 11th. every year when companies put their customers on a shopping spree with heavily discounted products, new sales records are steadily achieved. In 2018, the parent company Alibaba recorded an impressive trading volume of $ 30.7 billion within 24 hours. In the meantime, not only large German brands and companies, but also smaller online retailers use Tmall for cross-border e-commerce. In addition to a large number of active customers, they benefit from well-established infrastructures and can, for example, concentrate on areas such as product procurement or advertising. In detail, foreign companies are granted access to the Chinese market in two ways: On Tmall Global, traders who do not have a branch in China can sell their goods across borders. With Tmall Classic, Alibaba is targeting companies that already sell online and offline in the Middle Kingdom and have a corresponding sales license and shops.

Extremely popular, but negligible for cross-border e-commerce, is the Taobao Marketplace social commerce platform with a focus on C2C retail. According to the company, the online marketplace is used by more than 60 million daily active users, and 48,000 items are to be sold per minute. The main traders involved are individuals and small businesses. They use the marketplace to sell their goods, similar to the online auction house eBay, to consumers in the Chinese-speaking countries, but also increasingly abroad. However, there is no haggling on Taobao Marketplace. Products go over the digital counter at a fixed price. The focus is on a personalized shopping experience that is optimized through big data analyzes. With real-time updates, users receive detailed information about products and trends and can contact dealers directly. “Táobǎo” - the Chinese company name can be translated into German as “digging up treasure”. This playful approach can also be found in a rating system: Consumers - depending on how much they buy on Taobao Marketplace - reach different VIP levels and receive discount offers that offer an additional purchase incentive.

If you want to order small quantities of products directly from China, there is a high probability that you will end up on the Chinese shipping site AliExpress. The marketplace, founded in 2010, on which only traders based in China have been allowed to sell, is becoming increasingly popular in Germany due to its particularly low prices. According to the media, however, German customers are repeatedly left with a relatively long delivery time from China as well as poor quality and counterfeits. With this retail platform, too, the parent company relies on the drop shipping business model: All that is provided is an online marketplace for retailers and their shops that sell to customers all over the world via AliExpress.

The Alibaba Group has provided Alipay with an integrated payment function for customers on all channels since 2004. The special thing about it: The retailer is only paid out when the customer confirms receipt of the goods and thus his satisfaction. With the growth of the large trading platforms in the Alibaba cosmos, the acceptance of payment via smartphone has also increased enormously. Mobile payment is more widespread in China than in almost any other country and it is impossible to imagine the lives of Chinese consumers without them - even far beyond online shopping. Together with WeChat Pay, the payment app from the Chinese internet company Tencent, Alipay already covered 93 percent of all mobile payments in 2018. Alipay is also represented on the German market and enables Chinese tourists, for example, to shop unchecked with a familiar payment method.

Seamless shopping - the future of retail

In addition to its focus on e-commerce, the Alibaba group of companies is also a leader in the business areas of cloud computing, artificial intelligence and big data. Through the innovative connection of these business areas, the retail of tomorrow should be shaped in a pioneering way. Alibaba calls this seamless shopping and is relocating the entire shopping process to the Internet in order to provide its customers with a seamless shopping experience. To this end, digital retail is being brought together again more closely with stationary retail, but also with personalized services. Alibaba is growing with its own platforms and is also taking over other marketplaces such as Lazada recently for the Southeast Asian region. The long-term goal is to create a global e-commerce platform. The focus is currently still on the Southeast Asian market, but the Alibaba group of companies is also active in Africa and Latin America. The Chinese e-commerce giant is also investing in Europe and is currently building a logistics distribution center with huge storage areas of 220,000 square meters in the Belgian city of Liège. The new infrastructure will initially be used for shipping European goods to China, but in the future it can also be used for the reverse flow of goods from China to Europe.

For German manufacturers and retailers, it can be an advantage to work with Alibaba in order to get to know its processes such as payment processing via Alipay or logistics via the Alibaba subsidiary Cainiao. Those who manage to gain a foothold can benefit from the enormous potential and thus secure long-term competitive advantages.