What is meant by isothermal

Adsorption isotherm, functional relationship between the loading of an adsorbent and the activity of the substances to be adsorbed in the gaseous or liquid phase. It is strictly only valid for constant temperature conditions (isothermal). What is meant is i.a. the graphical representation of this relationship. The Langmuir adsorption isotherm (Fig.) Was originally developed for the adsorption of gases on solid surfaces and can be derived from both thermodynamic and simple kinetic considerations. It is based on the following model assumptions: For each active point on the surface of the adsorbent, only one particle is adsorbed. Once the particles have been adsorbed, they are stationary (no interfacial migration); the particles to be adsorbed do not influence one another. There is a dynamic equilibrium between the already adsorbed and the still dissolved particles and all reactive points of the adsorbent are equivalent (homogeneous surface). The Langmuir isotherm allows a maximum loading of the adsorbent to be calculated. In the case of very small activities of the adsorbate it changes into the form of the linear Henry adsorption isotherm. If the adsorbate is very active, it approaches the shape q = qMax on, i.e. the loading of the adsorbent becomes independent of the activity of the adsorbate.

The Freundlich adsorption isotherm or van-Bemmelen-Freundlich adsorption isotherm is based on an empirical power function (Fig.). The good fit of this isotherm to experimental data, which can often be observed, is an expression of the heterogeneity of many adsorber surfaces. However, this isothermal equation does not allow the determination of a maximum load. The Freundlich exponent is a measure of the deviation of the isotherm from a linear relationship between adsorbate activity and loading. 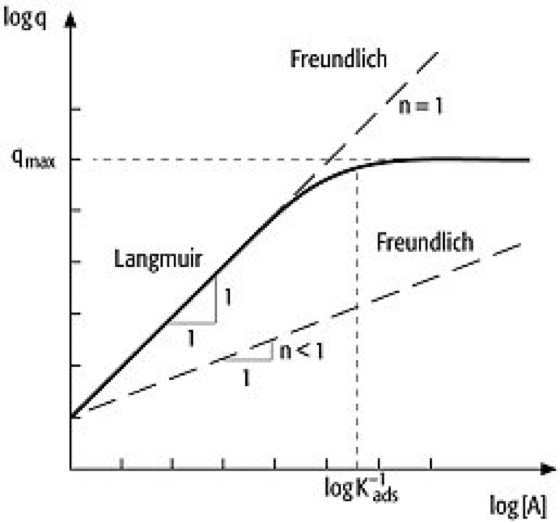 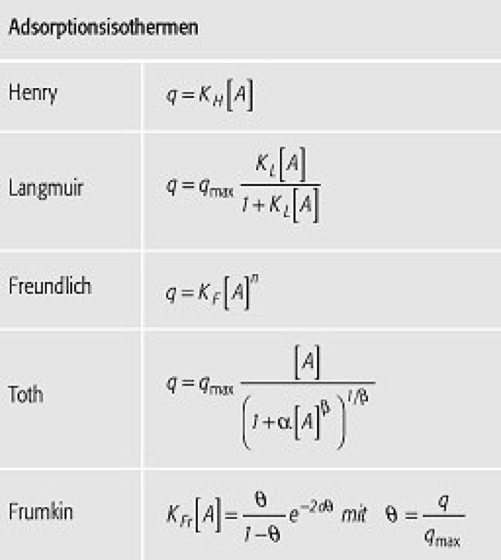